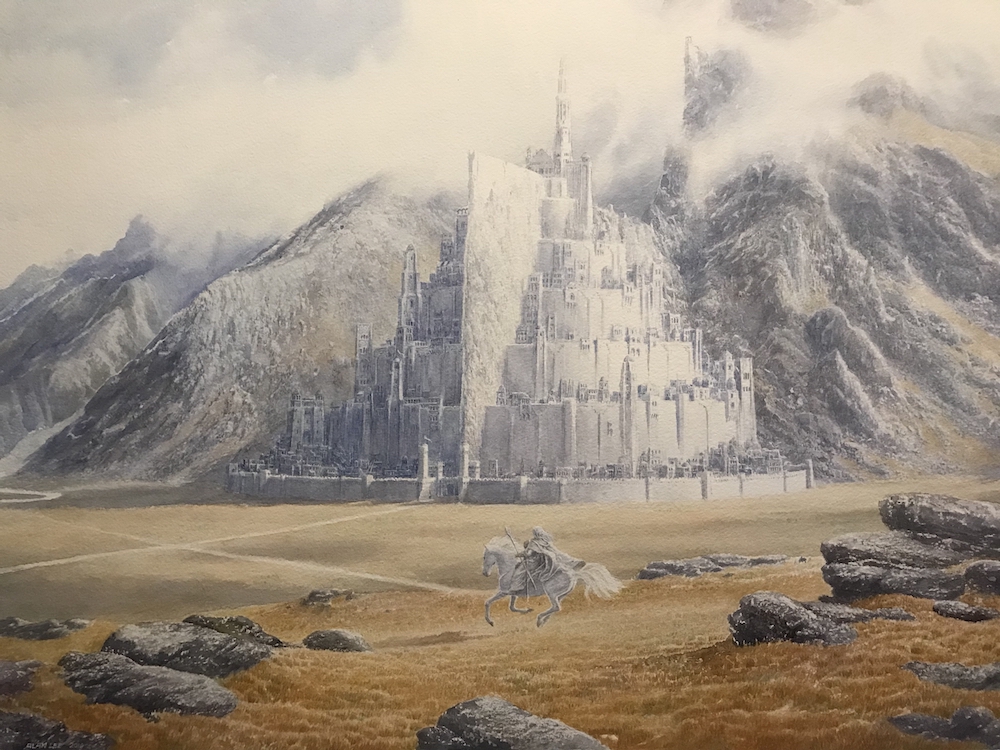 The Road Goes Ever On and On: Tolkien’s Creative Journey

When I first found The Fellowship of the Ring on the shelves at my dad’s classroom I thought it was a book I wouldn’t be allowed to read… a brightly colored cover depicted wizards, dwarves, and strange little people1. I gave it to my dad, informing him someone had slipped a strange book in his library. He shook his head slowly, took it from me, and handed me another book with peaky looking handdrawn mountains. He smiled and said “You should start with the first one.”

I opened the pages of The Hobbit and began to read. I was enthralled.

Taking my kids to the local library I still get little happy shivers passing the spot where I finally located my precious: all three Lord of the Rings novels. The shelf is now home to a horde of magical children YA novels of various mythologies and questionable longevity, but when I was twelve the bottom shelf held a glorious triptych of heavy hardback editions with illustrations by Alan Lee. Those words and images embedded themselves in my mind, and all my boyish daydreams were filled with castles, swords, riddle-games, and mithril mail.2 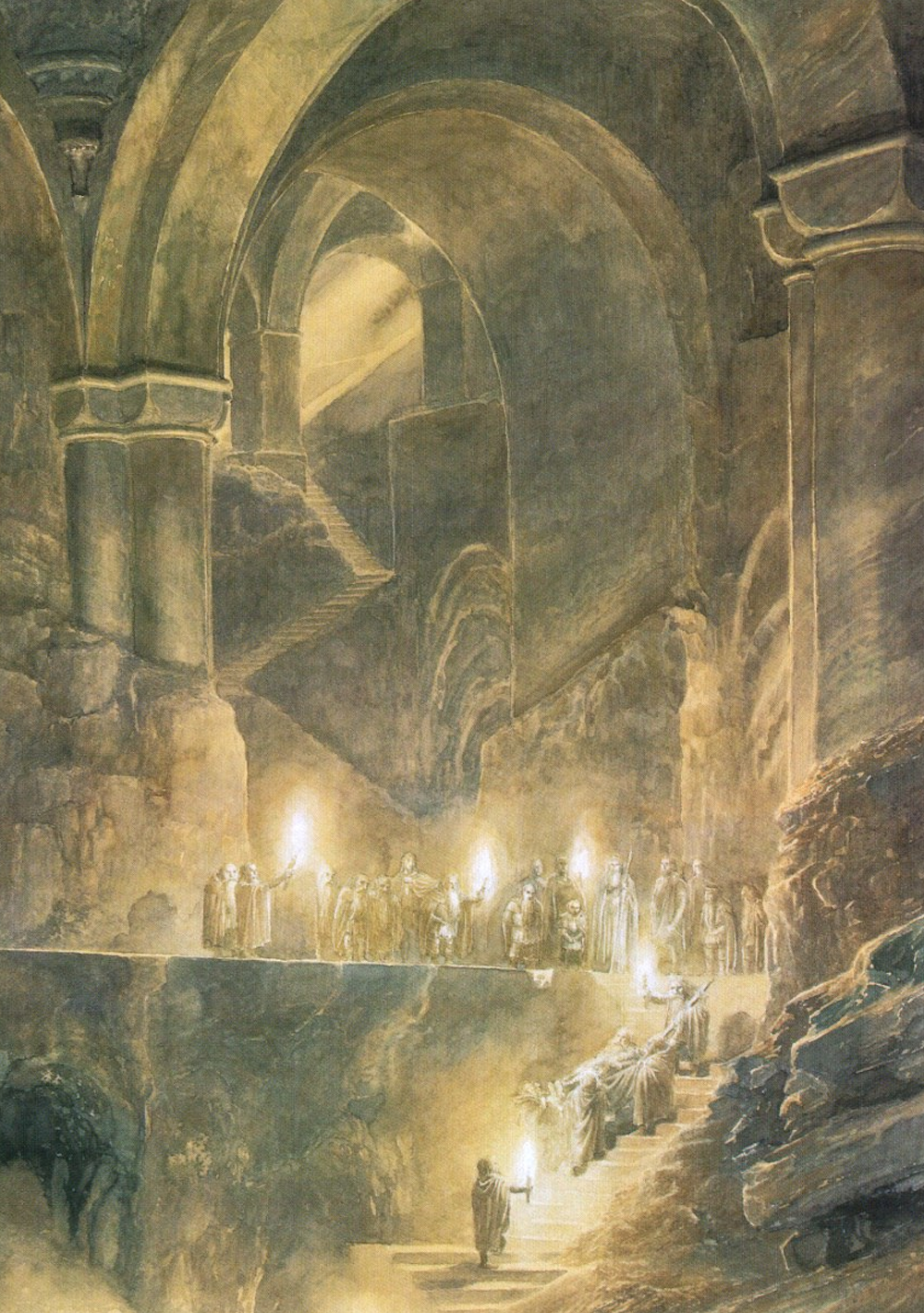 I’m going to entirely skip discussing the miraculously faithful Jackson trilogy or the recent TV show. If you want to playfully argue about them, shoot me an email and we can discuss. Today, I want to talk about how how I believe Tolkien became Tolkien… and for that I have to tell another story in another library.

My mid-teens were a wonderful time to be a fan of old fiction. Online libraries like Gutenberg.org allowed me to binge wildly through every Edgar Rice Burroughs novel, to sneak peeks into the mounting madness of H. P. Lovecraft, even extending to weird fiction mentioned in the footnotes of other works… like Voyage to Arcturus by David Lindsay (from which C. S. Lewis borrowed ideas for The Screwtape Letters.) I of course had re-read my now personal copies of Tolkien every year, but there was one Tolkien book I could not obtain: The Father Christmas Letters. There were no scans that I could find… and this was before Amazon broke the ebook market. My only choice was to phone up the central library system and place a hold on the only copy in Alabama.

If memory serves, it took a couple tries before both the book was available and I was able to get a ride to the downtown Birmingham library. I remember waiting on the mezzanine level, surrounded by a battery of beige microfiche viewers until the librarian returned with my prize: the last Tolkien book I had not yet read. 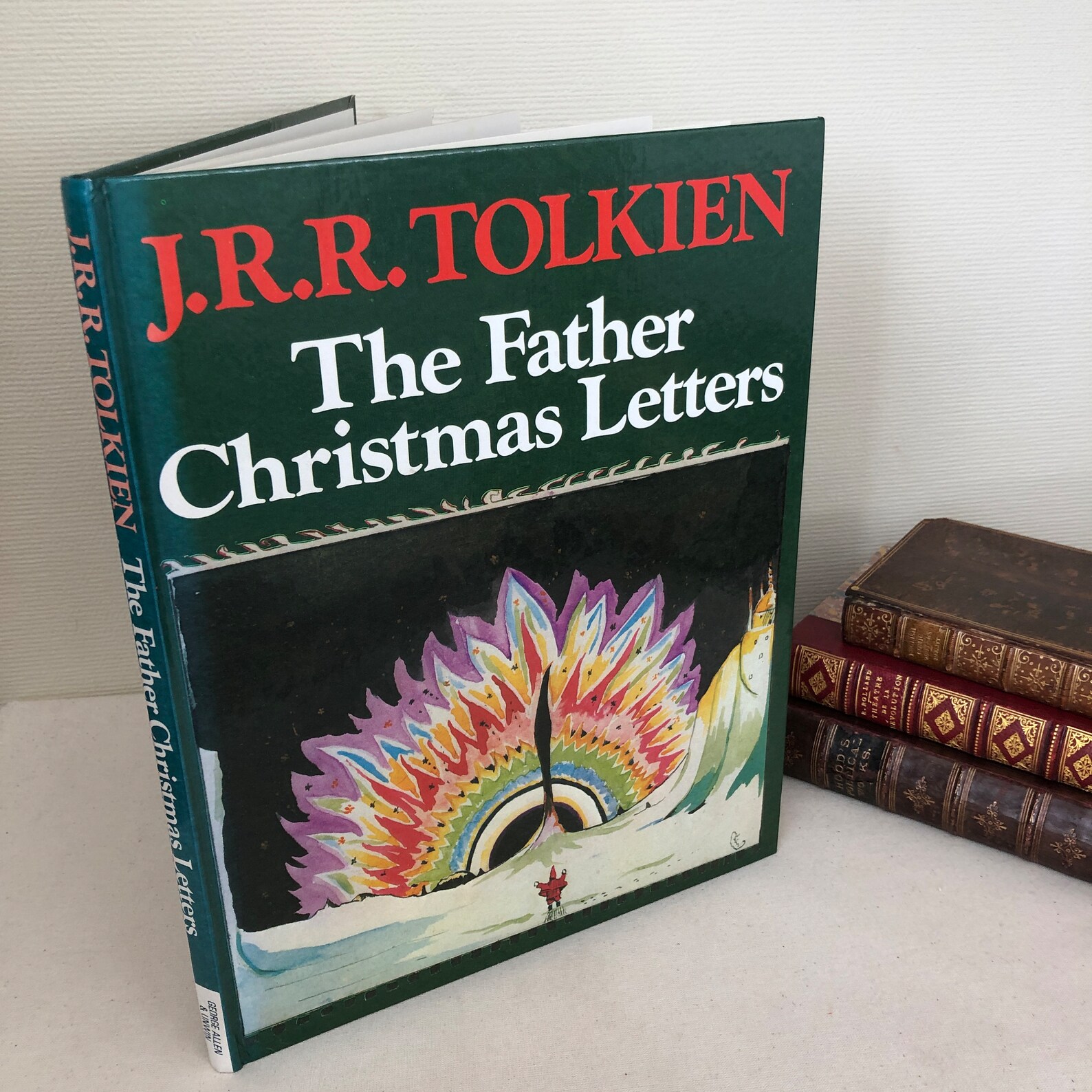 The Father Christmas Letters is not a novel… it's barely a book. It's a curated collection of artifacts… in this case little hand-scrawled letters from Santa created by a loving J.R.R. for his children. Every year the Tolkien children would rush to the hearth to find a little scroll… a newsletter of sorts from the big man himself. Each missive updated the children on what folks at the North Pole had been up to that year and answered the child-like questions they had left in their letters to Santa. 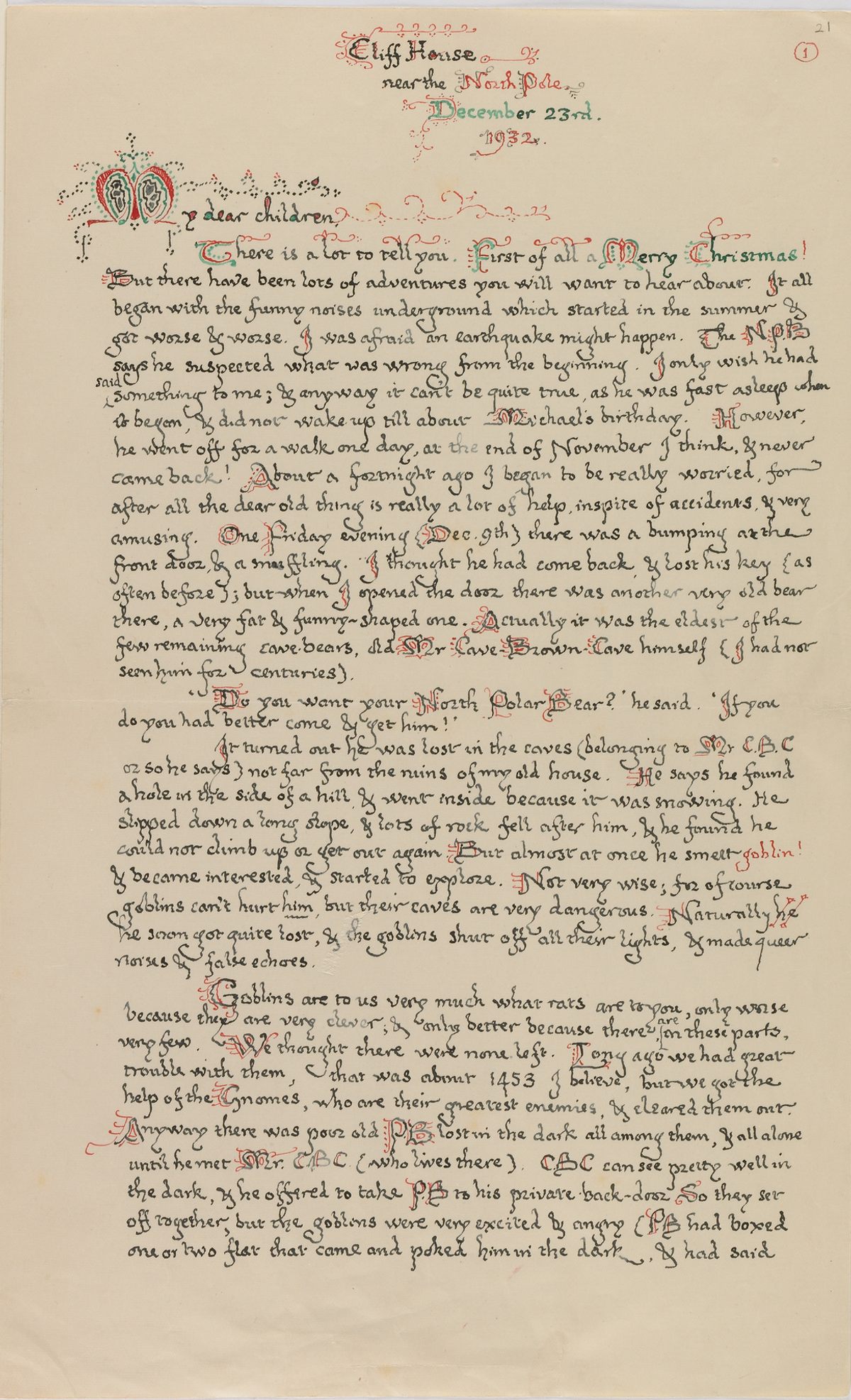 The joyful mess and effort in this creation is inspiring… especially now that I have become a father to some imaginative little ones of my own. As I paged through The Father Christmas Letters as an early teen I realized The Lord of The Rings didn't emerge fully formed out of nothing: The later master-work contains moments, themes, names, and concepts that evolved slowly over repetitive tinkering and reworking until they they culminate in a legendarium3 that still fascinates millions.

The Father Christmas Letters begin as simple, hand-lettered letters to Tolkien's children starting in 1920. Over the next twenty-three years the story evolves from a single note to a symphony of details and hand-drawn illustrations that delight and intrigue: 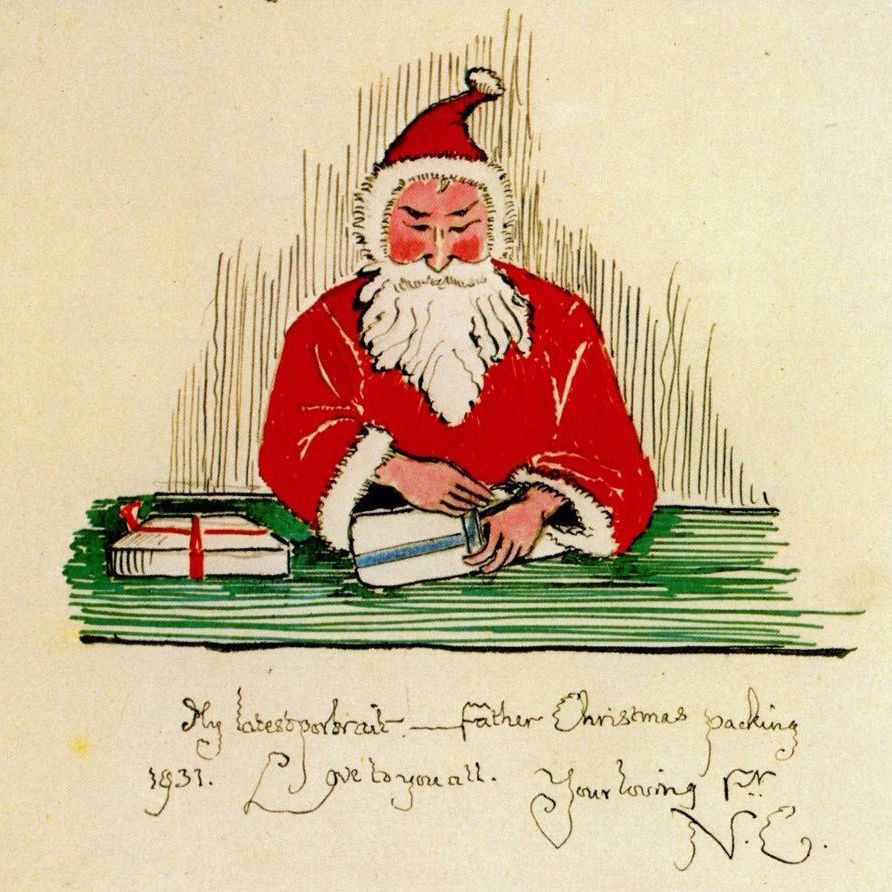 Santa's workshop is filled with elves who help make the toys, play and dance, and defend the workshop from the goblins. Over the years, the elves contribute major characters: chief among them is Ilbereth who helps Santa as a secretary and defender of the workshop. They have yearly adventures repelling the pesky goblins… exploring the caves, shooting off fireworks, and eventually calling upon the great North Polar Bear to help.

Ilbereth and the Polar Bear introduce the Arctic lanaguage and a goblin pictograms, and become regular commentators on the letters with their own distinct handwriting in their messages to the Tolkien children. Every year the wrongs are righted, the toys are recovered, the sleigh is loaded, and everyone dances for joy.

Santa is depicted as a tall, rather thin grey-bearded man in a pointy hat that delights to make lovely things for children. He's also a master of fireworks… which he often uses to scare off the goblins that live in the caves below the pole and are always scheming to steal the toys and ruin Christmas. His joy in caring for the Elves and for the children in his care combined with his love of fireworks and fighting goblins seem to suggest the beginning sketches of Gandalf.

I can't think of a reason not to read The Father Christmas letters. Even if you care nothing for Tolkien it is full of joyful childlike wonder and tangible fatherly love.

For teenaged Evan, Father Christmas was the missing piece connecting one of Tolkien's stranger works into his creative journey: Roverandom.

I had read Roverandom before The Father Christmas Letters. At the time I could see the parallels to The Hobbit, but the story is largely estranged from the larger Legendarium.

Roverandom is a little zany. 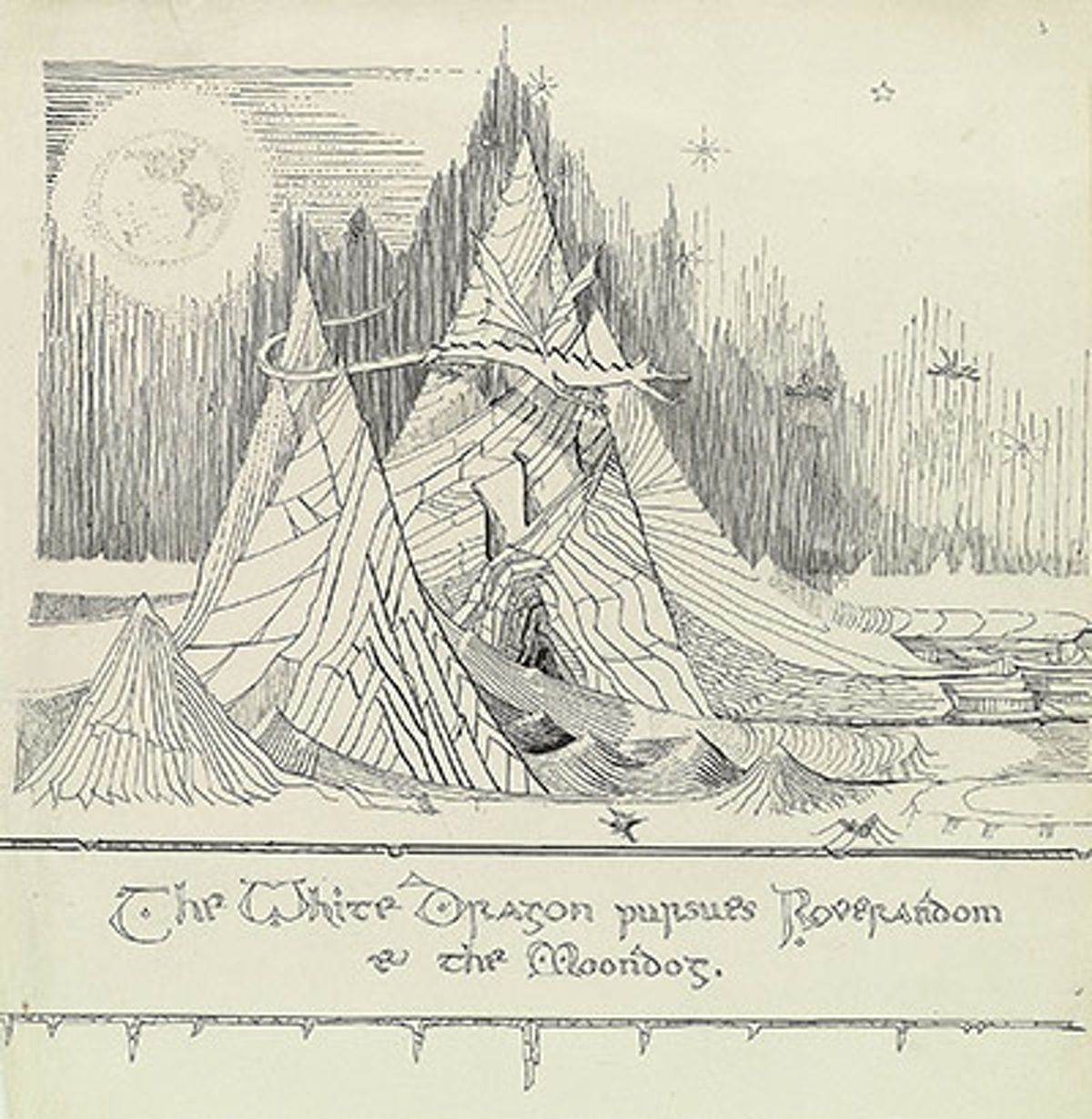 Roverandom is about a dog named Rover. He's cursed by a wandering mischievous wizard, and seeks out another magician to lift the curse… and ends up running from a dragon. It's in a similarly child-like vein to The Father Christmas Letters. You could imagine it just emerging half-baked out of the tired brain of a father trying to woo his children to sleep with another tale of magic and adventure, sprinkled with things they already knew and loved… and secretly starring one of his own children.

Roverandom takes the animal friends, mischievous magicians, and magical world of The Father Christmas Letters and translates into a Lewis Carroll-esque fantasy world… but it begins to feel familiar. In particular the wizard Ataxerxes feels like a proto Gandalf: concerned with bigger things in the world, and ultimately sending a humble protagonist on a grand journey against his will for his own good.

Now we return to the beginning of my experience with Tolkien… but near the end of his creative journey. The pieces of The Lord of The Rings are nearly all in place but thematic echoes of the previous iterations remain: another quest prompted by a wizard prank and ending in a journey to a dragon. It still is aimed at children: much of the peril is very non-violent, even the showdown with Smaug is largely another fairy-tale-esque riddle game.

I used to wonder why Gandalf is such a sort of tricksy antagonist in the start of The Hobbit in comparison with the wise and mysterious figure we meet in The Lord of the Rings. I now feel that the archetype is still in flux: flowing slowly and changing from the fireworks and toys Santa through the rune-cursing journey-starting Ataxerxes through the not totally formed Gandalf of the Hobbit to the fully fleshed Mithrandir of the Lord of the Rings.

Besides the wizard pranking the hero into a journey to a dragon, there are other elements of The Hobbit that continue to echo that “fairy story” mood from Roverandom. For example: The Hobbit's forest elves are more fae and capricious than the noble Eldar of The Lord of the Rings. As Tolkien's children grew and he continued to iterate on his great work the elements that feel timeless and mythic prevailed.

The Lord of the Rings

The Lord of the Rings is a well deserved classic… but it doesn't stand alone. It's the shining peak standing on a body of imagination and work for decades… starting with a Santa letter and ending in a trilogy that stands atop a genre and inspires imaginations for sixty years. Gandalf isn’t the only concept first prototyped in The Father Christmas Letters and slowly reworked over time: 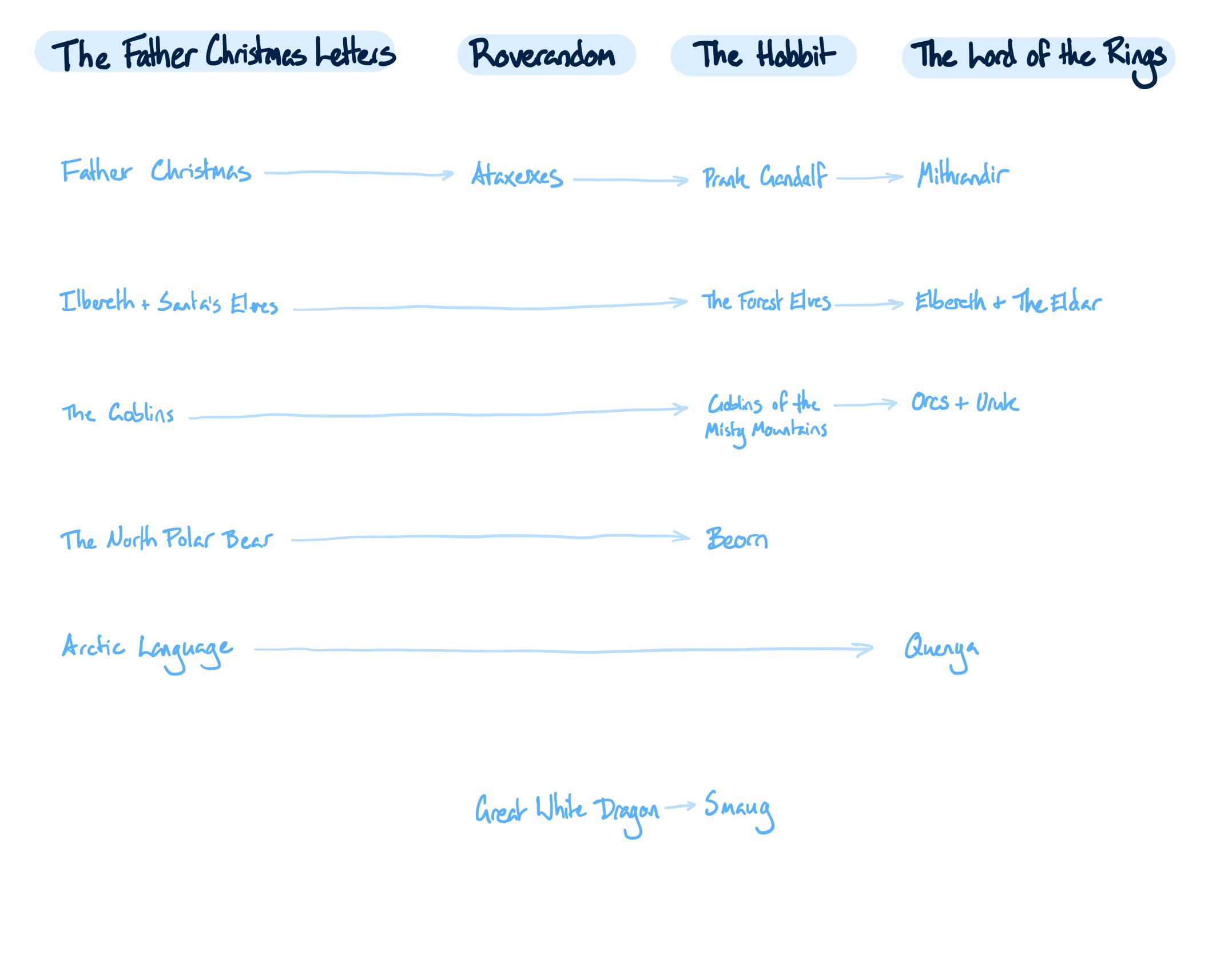 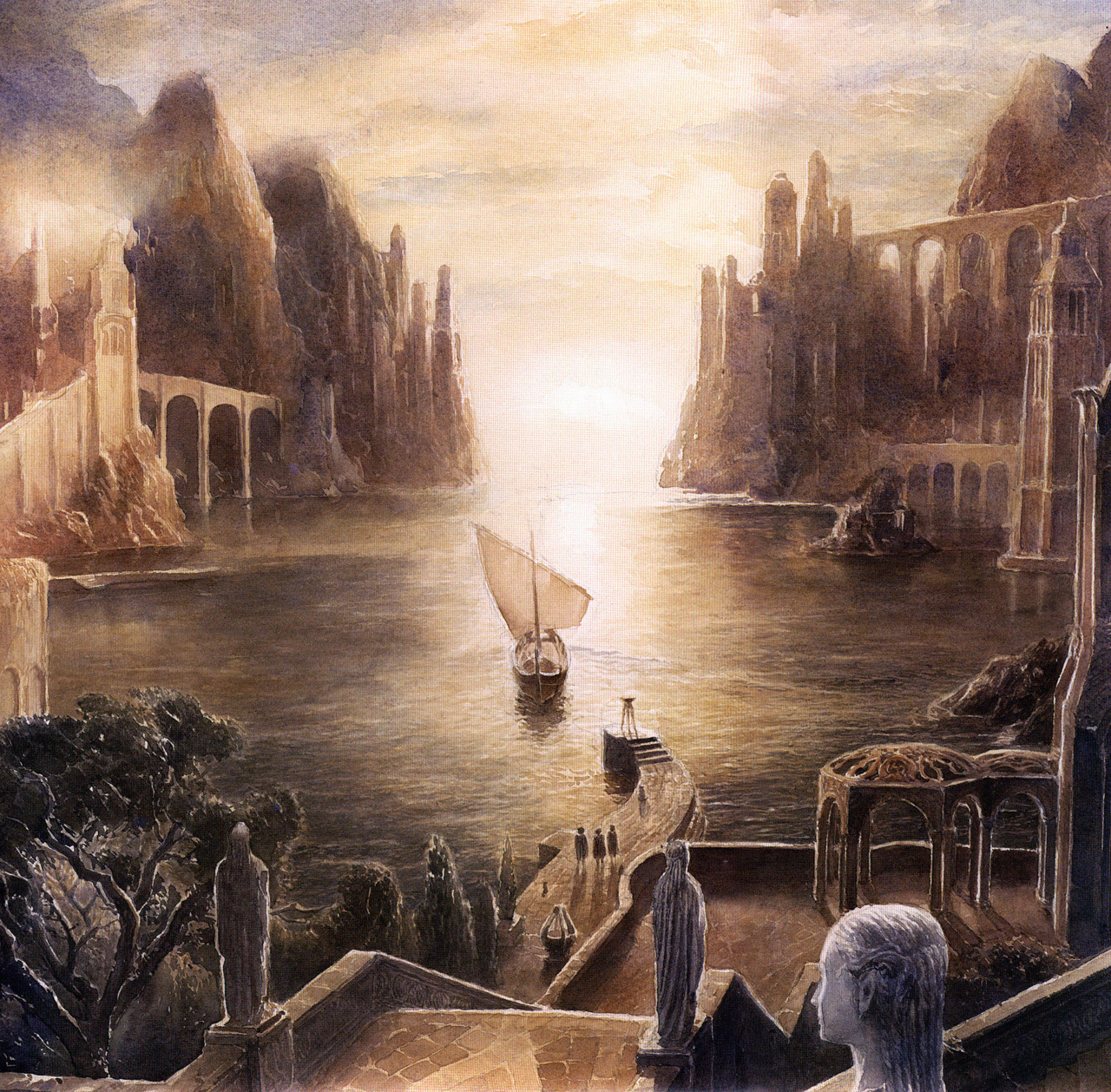 This essay is a love letter. Tolkien inspired me to write and create worlds. My little box of boyhood memories is filled with my own maps, currencies, dossiers of fictional generals and kings. The Lord hasn't led me to publish any of my halfbaked fictions… but it defined my childhood in a way very few other things did.

My perspective on Tolkien's legacy has matured as I move into adulthood. I appreciate not only the mastery of his magnum opus but I marvel at the loving, meticulous, patient and disciplined creativity that evolved over almost two decades. What began as a love letter from a father to his young children is a full-fledged world of heroism and myth almost real enough to live in.

This is why I’m obsessed with Creativity Systems. Sifting through Tolkien's creative journey helps me defeat my inner perfectionist: recognizing that I can simply create that which brings me joy and the repetitive process will improve the quality of my results. Tolkien had a Creativity System… a desk filled with thoughts he was working and reworking, and a yuletide tradition that ensured he revisited the concepts and stories for years to come. Any system that allows you to work, rework, recombine and connect your ideas…  that's what grabs me. Digital linked markdown files of atomic notes is just a strategy. The goal is the constant recombination and cultivation of slow hunches that blossom into the right moment for creation. This essay itself was a draft written over a year ago, coalesced from years of rants with fellow Tolkien fans, pushed by discussions of the creative process with my writing friends, combined with notes on books like The War of Art, and pushed to completion by predicting and reacting to the final nudge of a season finale.

Like Bilbo’s roadsong, the creative process goes ever on and on. The trick is to keep walking. Thank you Mr. Tolkien. 🙏