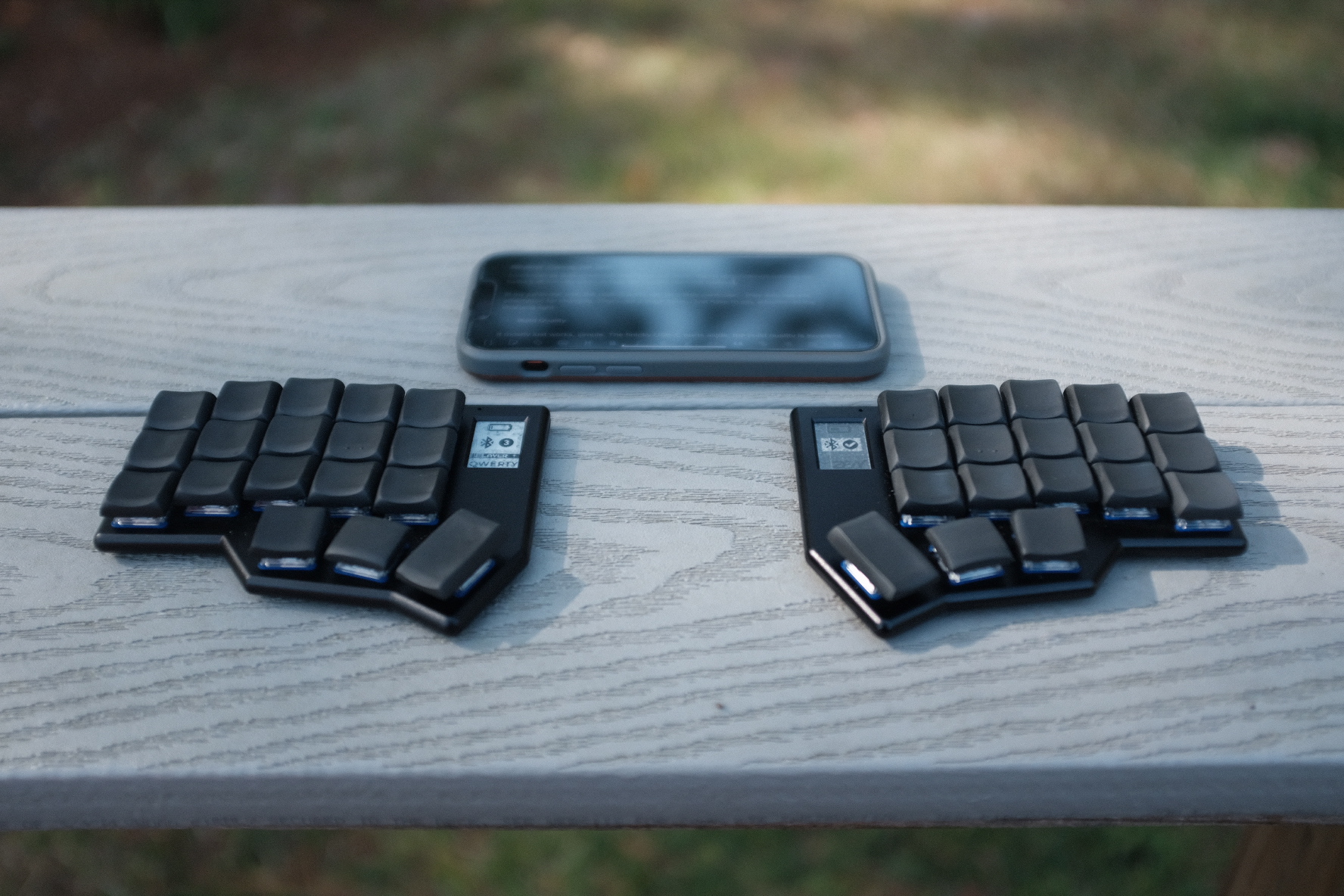 In December I received my Corne-ish Zen R2 from Darryl over at lowprokb.ca. It's been my 100% daily driver since then, at my desktop, at coffee shops, and on the road. I am thrilled with it.

If you like what you see in this post go immediately to his Discord and join the #roles channel for notifications on R3 options which should open very shortly. Good luck!

For a while now I've been rocking my Boardsource Corne LP as my main board. Thanks to my Atreus, I had slowly realized that I wanted a 5x3_3 style board, and I happened to be on a community Slack with Darryl, who pointed me towards his project. I joined.

Some months later, and two days after the Zen arrived, the Boardsource Corne LP was sold on Mechmarket. I really haven't used any other keyboard since.

There are a lot of aspects to this particular board, so I'm going to be detailing them all. If you want to read just about the Zen in particular, you can jump ahead.

The first big change was switching from QMK to ZMK. QMK's license is not compatible with Bluetooth, so off to ZMK-land we go!

It was relatively trivial to port my layout over to ZMK, and I have come to greatly prefer its simple config repos, Github build actions, and simple flashing.

In December, the only thing missing from my QMK layout when I ported it was tapdances. A couple weeks ago tapdance behavior was added to ZMK, and I am now 100% content with the firmware. I wish I could move all my boards over… even if only for Caps Word upon which I have become hopelessly dependent.

There are some zen-specific features that have not yet been merged into ZMK main so you do need to use a fork of the build actions. It's not hard, and the folks on Discord are lovely and helpful. 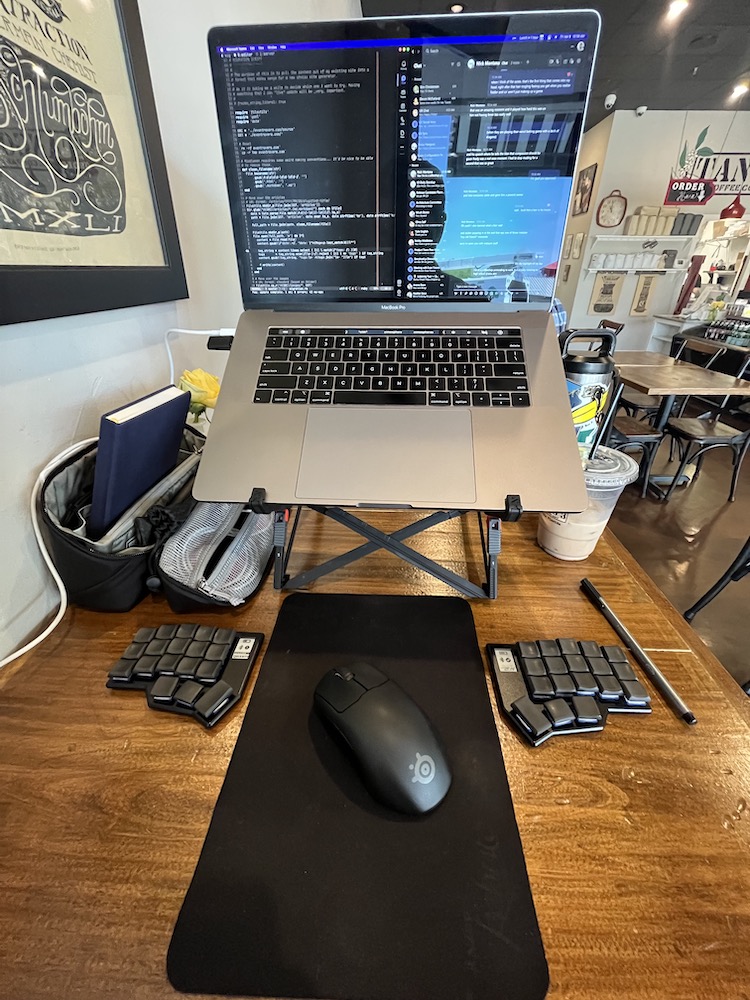 Although arguably ZMK has a cleaner configuration and build steps… the true reason to switch is for wireless.

As I noted in my mouse search, I have been a snobby "wired only please" person because I didn't think the wireless latency was good enough… but honestly ZMK's latency over bluetooth is unnoticeable to me. Nicell put together a very well researched video, but as a very picky input-device user… I can tell you it's good.

The other cool feature that ZMK offers is pairing to multiple devices simultaneously. I can press a key and switch my keyboard between up to five devices… letting me use one keyboard at my desk to text on my phone, discord on my ipad… or access either laptop or PC. It's really slick and clean. 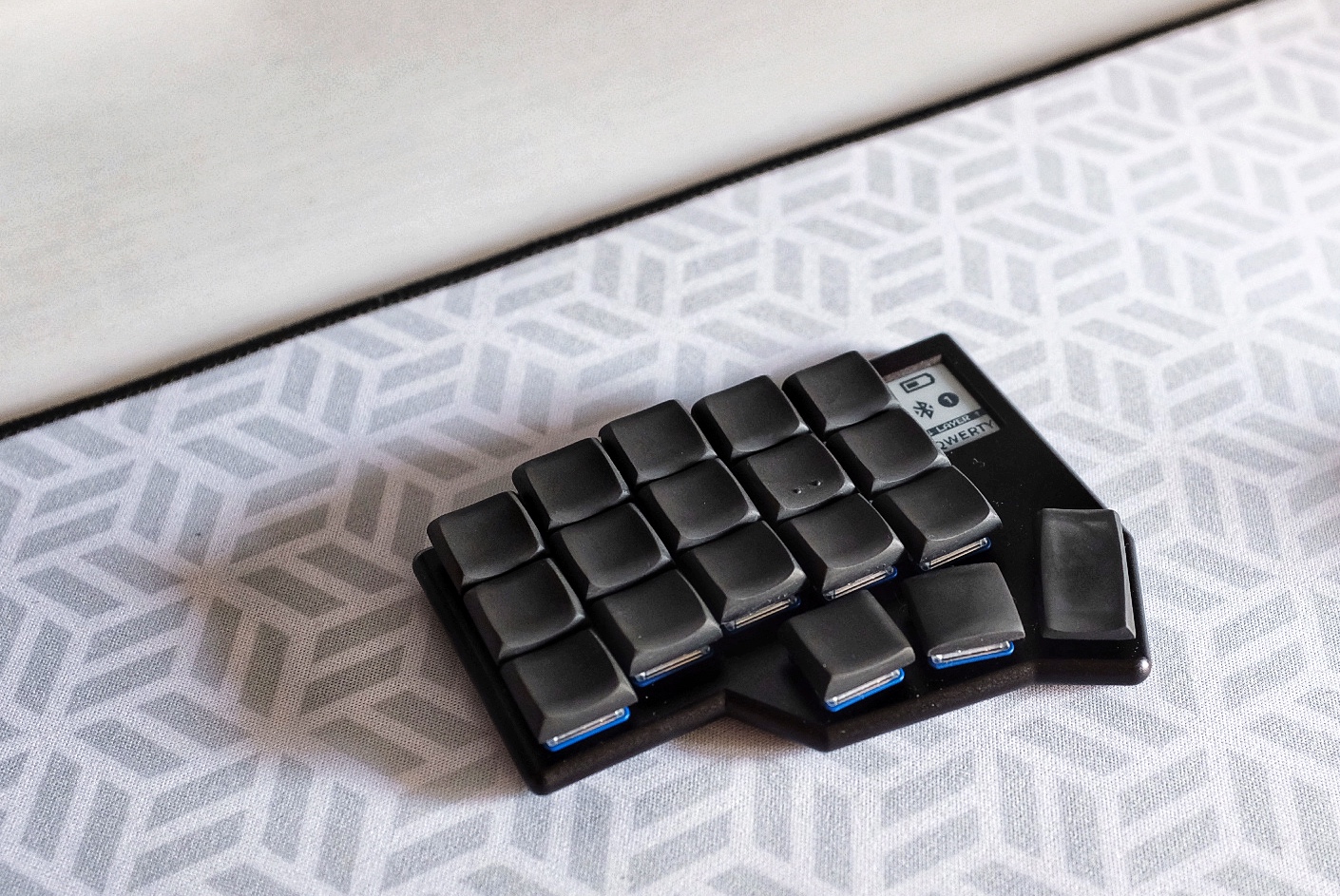 In preparation for my "end-game"1 setup, I splurged on some ink-black custom caps from Asymplex: Chicago Steno.

They have an unusual texture… it’s a smooth ceramic, so more like a nice coffee mug than anything else. They are much grabbier and scoopier than the XDA or MBK caps (wide and flat!) I had been using. While I do like the slight curve/bowl profile in the alphas, the highlight is the gentle swoop of the thumb keys. If you can afford them, I highly recommend them.

Another part of becoming accustomed to the caps was embracing the choc-spacing. The previous two choc boards (Kyria and Corne-LP) were MX spaced… but now there is no dead space between the choc-spaced caps. The reduction in finger travel is now worth the learning curve… but it took a day or so.

I'm using the same 20g gChocs I had on the Corne LP. I miss the tactile event of MX switches, but the light linears fit this tiny board.

The Zen is a wireless hotswap choc-spaced corne style board. It's got a low-profile aluminum plate and chassis with a built in battery rechargeable through USB-C ports, and e-ink displays to tell you the battery life and current Bluetooth connection status. On-off switches and a reset button that also puts it into boot loader with a double press complete the svelte inventory.

The buyer could choose between a six-column and five-column corne layout, and there were a number of voted on color options available. I wanted mine to be all black, so that's what you see.

Inside the box was a nice note from Darryl, his very cool PCB business card, some great sticker swag, and a slick black carrying case. The Zen halves were shipped in the case in microfiber carrying bags. As I love a good carrying case… I was very happy.

(I was so excited, I didn't take any proper unboxing images. Sorry.)

Everything put together as instructed in Darryl's great documentation and videos. There was a slight issue with the first run where there was a missing hole for a switch leg (this has been fixed in future runs), but I just snipped off a leg and we were off to the (monkeytype.com) races. 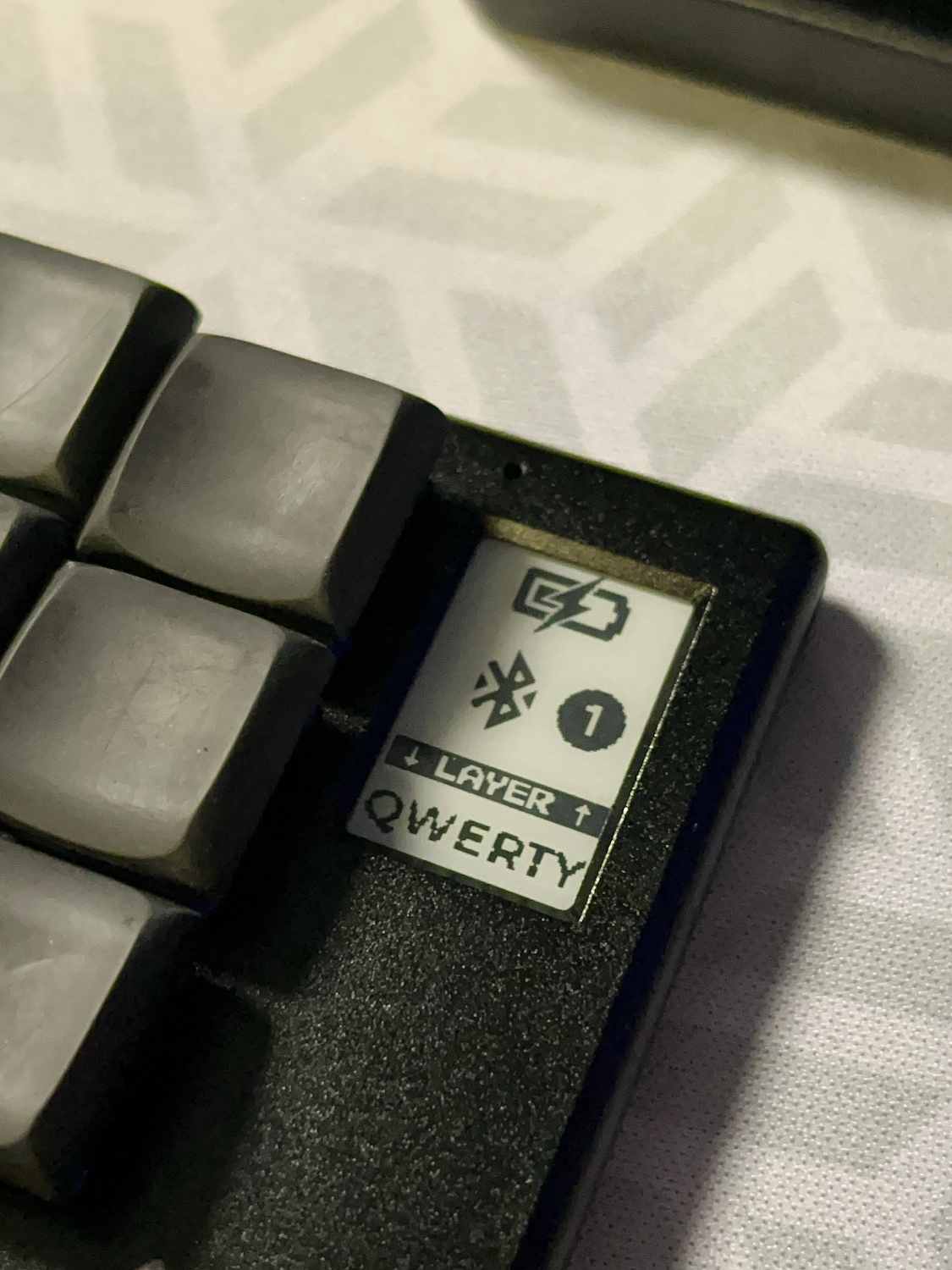 The E-Ink Displays are… E-Ink, with all the good and bad. They show the current bluetooth status and connection, battery level, and layer.

The refresh rate of E-Ink is much too slow to catch-up to momentary layer switching, and the battery indicator is mostly inaccurate, and apparently the E-Ink booting slows the overall startup of the device a few seconds (will be patched out in the future), but the Bluetooth layer indicator has been helpful in helping me realize which device is receiving input. 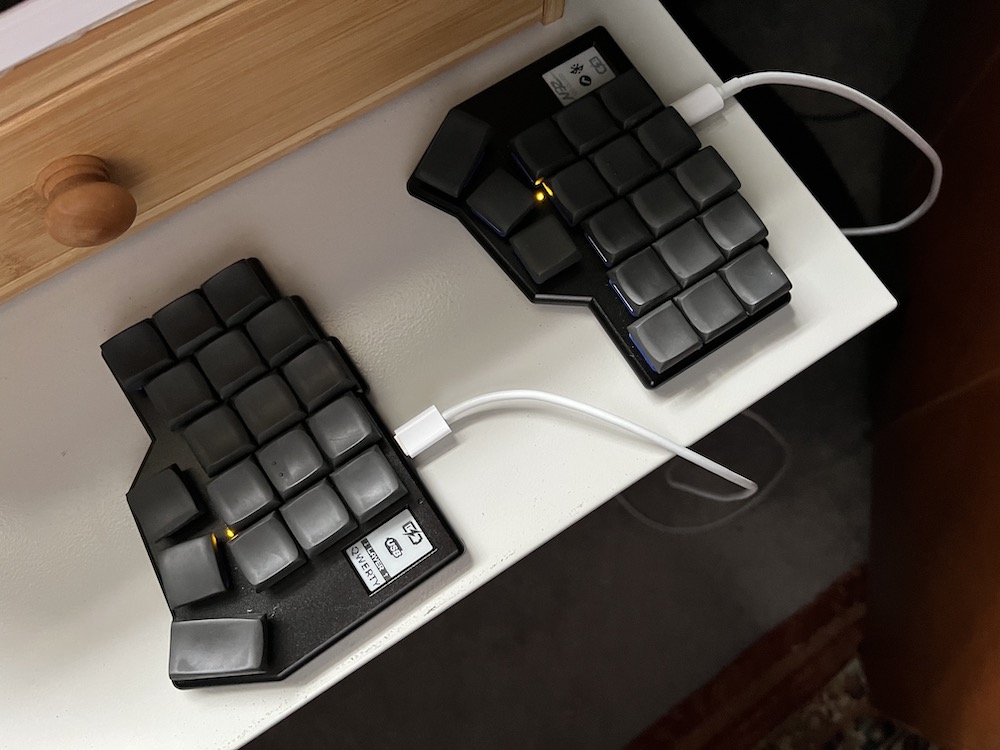 The Zen has a built in rechargable battery. In my (very unscientific) all-day usage tests it seems to last about eight to seventeen days on the default sleep settings. The LH manages the connection to the computer so it runs down a little faster. For most users could charge over weekends and never run out. Darryl does recommend running the battery all the way down to help the system learn the battery, so I tend to do that.

In my particular unit, the USB-C ports can be a little particular… they only like one orientation for charging. That's not a huge issue, I just have to pay attention to the charging light.

It mostly just works, simple. The finicky USB-C ports aside, the build quality is excellent. There is no way I could ever fabricate something this high quality by myself. It is just that small. It's really the only way to have something this small and low-profile.

The on-off switch is useful for travel, but I rarely use it at home.

Darryl and I have had some chances to chat on Slack and Discord, and I have only found him to be helpful. Group buys are hard at any time, but in the middle of COVID and turmoil they are extra hard. I'm super impressed with his communication and handling of issues. He found an issue with a diode that prevented USB-C -> USB-C charging, documented it, reported it, and carefully fixed each and every device if we asked. Never had a better experience.

Honestly… worried that the amount of love and care that went into this is not reproducible… rest up Darryl! Round 3 is coming.

How about using it? 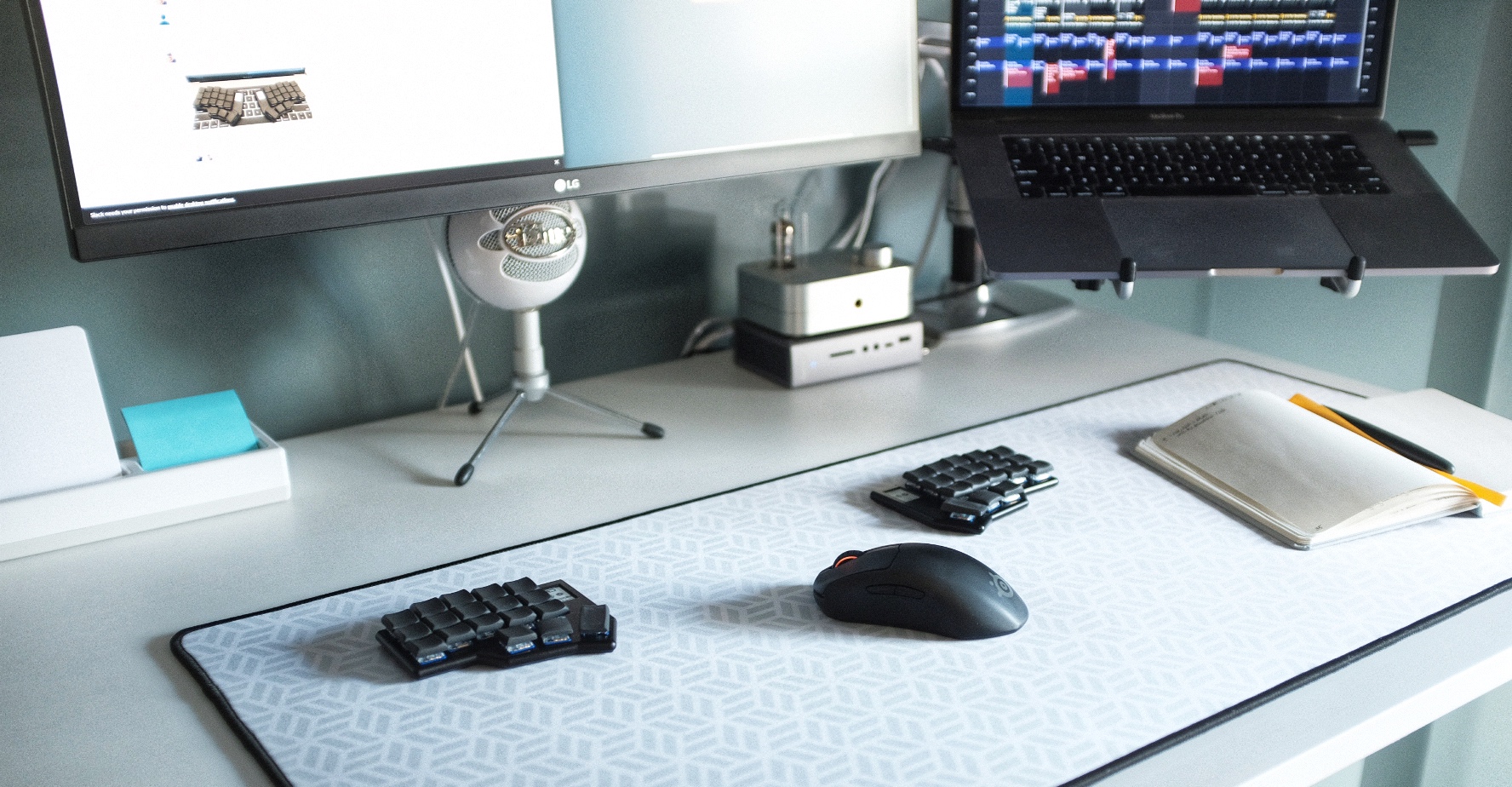 It's great. I didn't realize how much cables get in the way until I didn't have to deal with them. On the desk the lack of USB or TRRS is clean, and I use them far apart but it especially shines when putting them on the laptop or in a confined space like a small coffeeshop table. Because there's no limit to how close or far apart they are, I often use them like an Atreus close together. Just being able to pull them out and start working is very freeing and makes me use them on the go more often.

I've noticed a couple weird things when they aren't on flat surfaces that causes my RH copy to cut out, it seems to be a known. I think I could probably open them up and check the battery connection but it doesn't bug me that often. I may fool with it eventually, just because I would like to use them leaned up against my legs. (I would really like to figure out some way to mount them to my legs… but that's a project for another day.) 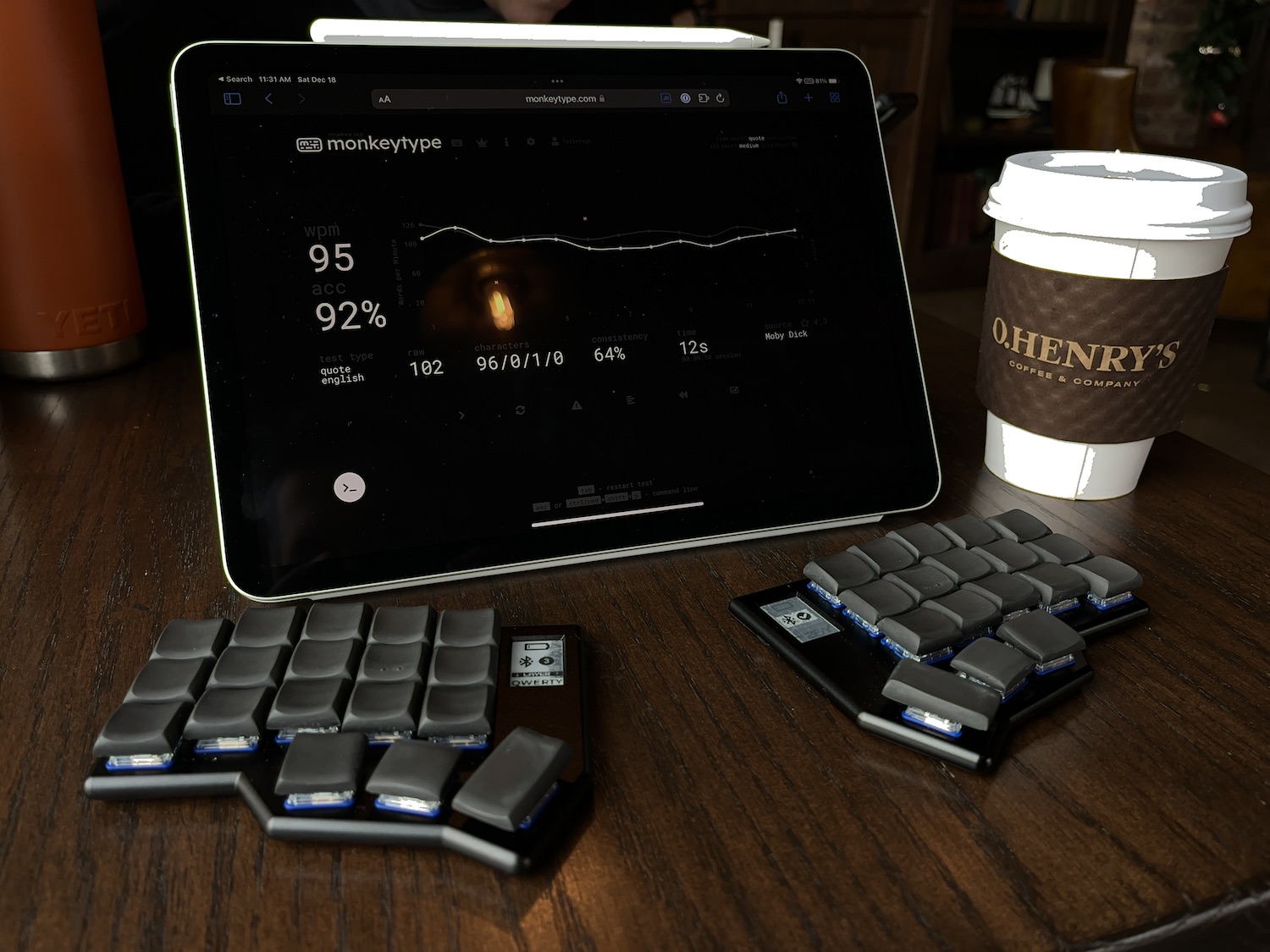 It's awesome. It's my favorite of my many boards that I've ever had. As far as I know, it's the most luxurious 3x5_3 keyboard out there… and it deserves it. If you know you want the split low-profile corne-esque life and you want the smallest, fanciest one… this is it. Go get in line.