Looking for a Serious-Use Travel Mouse

tl;dr: I’ve been looking for a high-quality wireless mouse that supports USB-C: I found it in the Steelseries Prime Mini.

For years, I have been using gaming mice for code and design. I used MX501 for a long time, then a steady series of Razers… currently a Razer Deathadder. I’m just used to the feel, the speed, the quality. I can’t use the bars of soap that the fruit company calls magic1.

As Mac has slowly moved to USB-C… so have I. I have tried to keep an eye on mice that support USB-C, and thought I’d take another look.

Earlier in the year, I had picked up the latest Logitech MX Master 3. I did not like it. It didn’t fit how I hold mice, I don’t use 60% of the buttons and features, and it felt very laggy.

We are considering doing some traveling, so more coffee shop work could be a possibility. I want something USB-C, travel friendly, and fast. I don’t like the lag I’ve seen in previous wireless mice.

The last good travel mouse that I ever had was the first version Razer Orochi. It supported both wired and bluetooth, used AA batteries, and was my weapon of choice for a long time.

Look how small the Orochi is!

What I’m looking for:

For the purposes of this search, I’m not going to try and evaluate:

This is also not one of my long-use reviews… yet. I’m making a purchase decision and returning the others. I put in an order for three options, and have spent the last day evaluating the following: 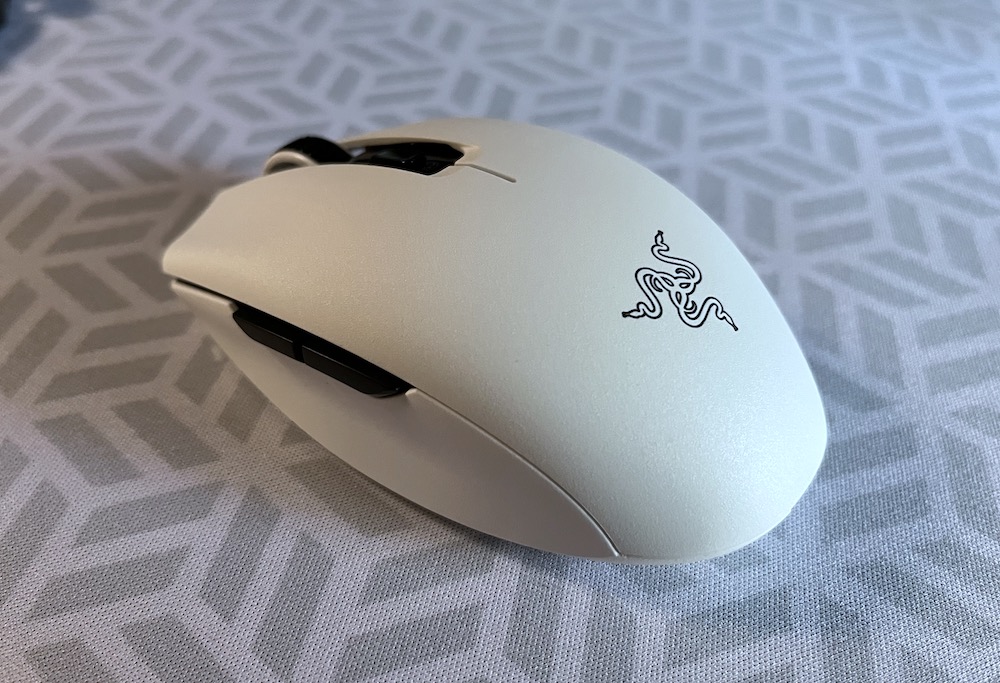 Because of my long fondness for the first version and the fact that my Deathadder has been so successful on OSX, this was the first one that I reached for. Of the three, this is the one that is billed as a “travel mouse.”

The Orochi v2 is also the only one of the three that supports wireless without a dongle through bluetooth, just like the first version. The Orochi v2 does not support any wired mode.

The Orochi v2 is significantly bigger than the v1, and a touch smaller than the other two mice. It has that familiar Razer grip.

You have to download Razer Synapse to get the mouse speed up to my customary speeds. The default three settings weren’t fast enough. I’d tell you how it went, but Synapse doesn’t work after OSX Mojave. 👎 Fail.

I don’t like that it requires batteries… nothing else in my bag does. It’s nice that you have the choice of using either AA or AAA, but it’s a dealbreaker for me. I want my wire dopp to just have some USB-C cables, a power brick, and go. 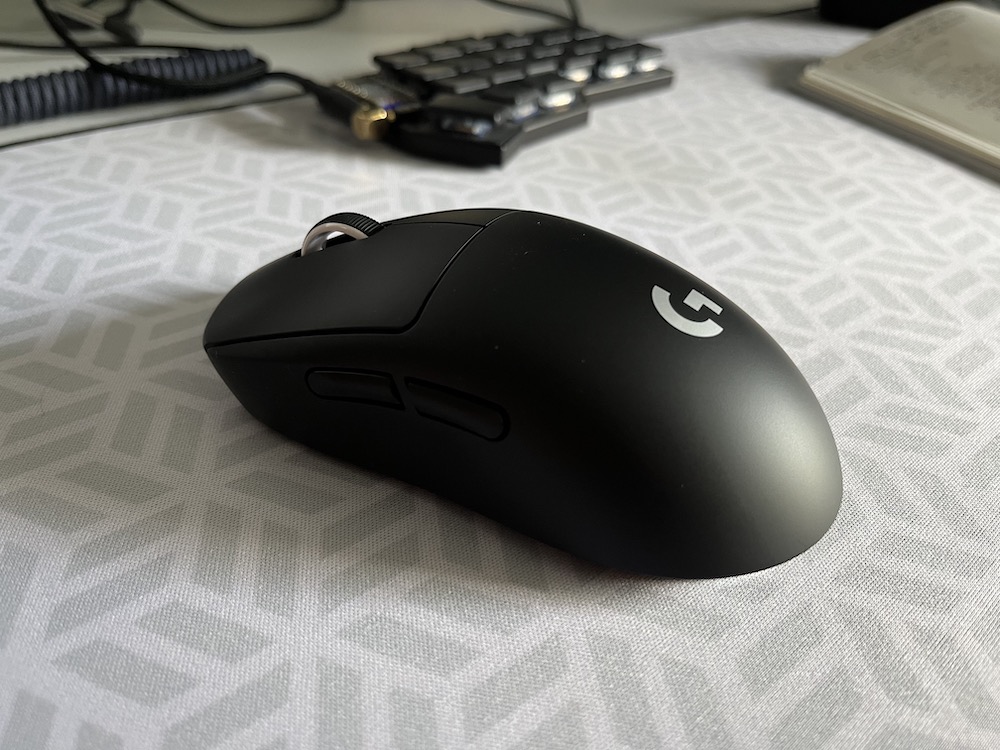 Immediately after taking this one out of the box I gasped. It’s really light.

It fails my USB-C requirement… twice. It has a trim little USB-A dongle, and it’s charging port has a custom fitted USB-micro cable. It’s not a bad mouse cable, but it’s stiff and not as nice as the one with the Prime.

The USB-A dongle does have the neat feature of being stowable inside the mouse’s shell for travel… but I’ll need to carry an adapter anyway which kind of ruins it for me.

I put it on the list because I saw a lot of people using it online, and was curious how a wireless mouse held up in terms of responsiveness and latency. Of the three I tested, it has the most options and the highest DPI/CPI, but there’s a catch:

There’s no onboard DPI/polling controls! Out of the box, it’s set to the lowest setting, a paiiiinful crawl. You have to install Logitech’s G Hub software (brew install logitech-g-hub) which is powerful and works on Mac, but I just need a mouse, not separate sniping macros for each game. G Hub wanted me to do a firmware update on both the mouse and the dongle as soon as it booted, which required me finding two USB-A adapters because they have to both be connected to update.

While it took overly long to setup (made painful by the default sloooooow settings) once connected the mouse is fast and responsive. I had no clue that a wireless mouse could feel so fast. I am really impressed, but in order to use this mouse on the road, I have to keep track of a couple custom cables just for the G Pro. Not ideal. 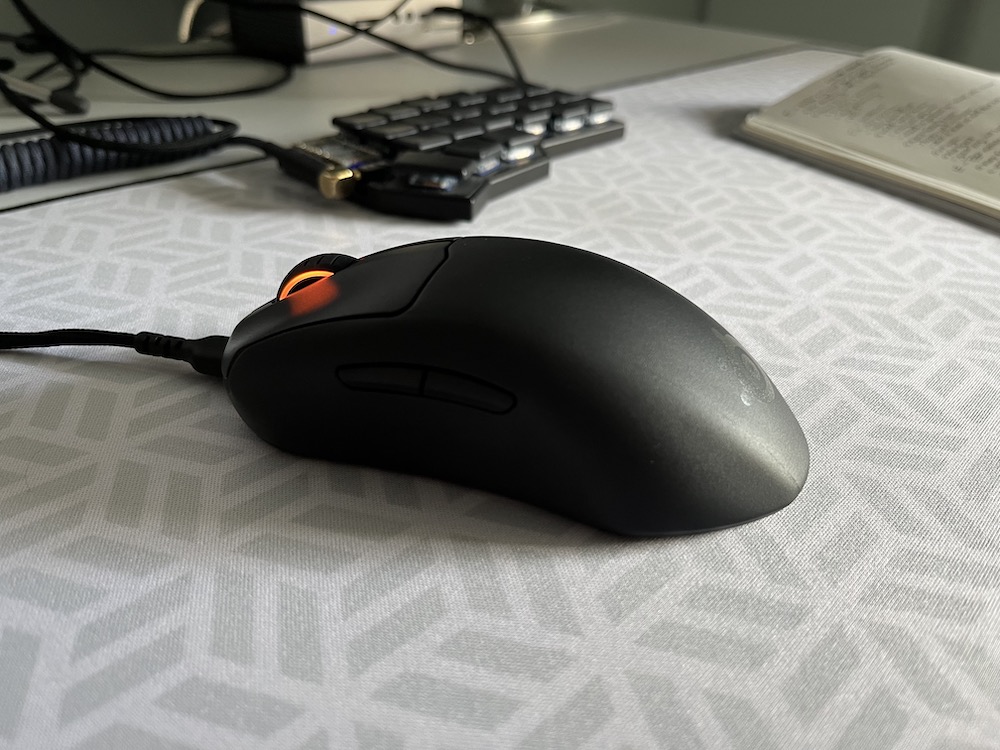 I am a little surprised how much I liked this mouse. I had two Steelseries mice in the past, the Xai and the Sensei. Both had very strange tracking issues I was never able to nail down. It could have to do with my lack of knowledge on polling and such, but it was frustrating.

The Steelseries Prime Mini is the first USB-C only gaming mouse that I have yet found. It’s very right-handed, so lefties beware. It’s a touch heavier than the ridiculously light G Pro, but not overwhelmingly. Like the G Pro, I was impressed with it’s wireless latency… it feels as fast as a wired mouse.

The included dongle for the connection is USB-C! It’s fat though… but will barely permit both the default Mac charging USB-C cable and the old Earpods TRRS. It doesn’t store in the body like the G Pro, so don’t lose it3. 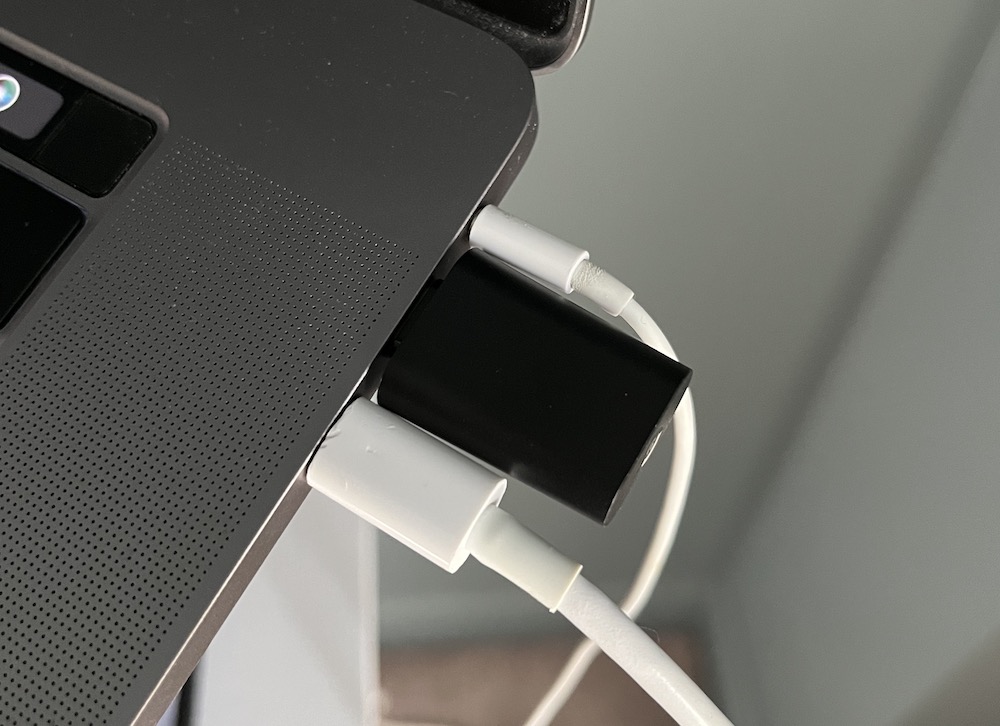 More importantly, the port on the front of the mouse is also USB-C, and seems to work fine with the number of USB-C cables I have lying around. They have provided a USB-C -> USB-A cable with it, it’s paracord wrapped, very light and indistinguishable from a normal wired mouse. It’s as nice or nicer than the fixed cable I’ve got with my Deathadder. It actually feels as light as the one on my friend’s Glorious Model O.

I appreciate that the Prime Mini requires no software to update or maintain, there’s a hardware DPI/polling button on the bottom. There is Steelseries GG, which does work on the mac and supports even higher DPI/CPI settings. Didn’t need it anyway, the external button was enough.

For me, the Steelseries Prime Mini wins hands down. Because of my travel objectives, the fact that it uses the same cables as my keyboards, iPads, and computer charging makes it an easy choice to grab on my way to a coffeeshop. I like that I could use it wired on my standing desk, grab it and throw it in my backpack to take to a remote location to use with the dongle. Best, at half the price of the G Pro Superlight I feel less guilty buying another peripheral. If I was choosing purely for gaming/desk feel, I would probably be keeping the G Pro Superlight. It just feels that nice… but not nice enough to maintain yet another special cable that only works for it.

It will serve as my primary mouse for a season, both at my desk and on the road. The Prime Mini. A serious-use mouse for serious people, just plug and play. 👍