Lifecycle of Notes: My Implementation

This is a direct follow up to my previous discussion of the "strength of notes" and nurturing thought.

As with all aspects of a Creativity System, how you implement such a classification should differ based on your brain and creative goals. As a simple example: I believe that Jerry Seinfield uses two yellow legal pads… the first contains rough drafts of comedy material, and he migrates the "good ones" to a second for refinement. This is a rough classification system. In different episodes of LYT-house I'm pretty sure I have seen:

These are so creative and are effective as identification… you just have to decide what works with your brain and goals… and steal it. 😈

I have written about my particular inputs and outputs. In the light of this my system uses different kinds of note, (the filename and structure) to signify the "strength" of an idea. The two main kinds of notes are:

This lifecycle kind of happened accidentally but it has stuck. In the many transitions of my system I tried 100% ZK style notes, and then migrated to Named Notes... but only for notes that had titles. This left a lot of my capture automations still creating ZK-style notes and created an organic difference between captured "ZK" style notes, and intentionally crafted evergreen Named Notes.

Before I get a letter… I know that these aren't proper "zettelkasten" notes. They are just what I call them.

Zettels for me are the entry point into my note-taking system. Because they don't have a name, folder, or categorization they can just enter the web at any point… cheap, easy capture.

Zettels (maybe I should come up with another name!) do abide by the note-making rules: a singular, atomic idea, in my voice, interesting to me… and they usually have at least one link to something else. They sometimes aren't more complex than a single sentence.

A single link to a verse and some comments from a sermon or personal study… usually unverified by further study:

A reflection on a book idea that I have not proven or become convinced of yet:

Commentary on another note that didn't belong to that note's singular idea:

A "label" on the "line" between two other notes. These are often made while exploring links… and I find one that I feel like future-me would need a little more context for how these relate or to connect a few things:

There's a lot more that gets added as zettels:

Zettels make up the bulk of what gets captured into my system. It's rare for me to enter a "strong" idea right out of the gate. Those "strong" ideas, (usually ones I've been holding for a long time) get entered as Named Notes.

A Named Note still follows the rules of atomicity, interestingness, and links… but it has a filename and title that is usable in a sentence and meaningful for me.

Choosing a good name is important. Names that could just be the name of a #tag (i.e. "Marriage", "Agile Methodology") are too generalized. These usually become hub notes or Maps of Content (as Nick Milo styles them.) If the name is usable in a sentence and meaningful to me, it helps me constrain the note to be singular.1 Instead of "Marriage" I have a note named "Living in an Understanding Way." That's a meaningful thought to me… and it might get split into "Give Myself Up For Her" and "Living in an Understanding Way" as the thoughts become more developed and need atomicity.

Because my "weak notes" don't have descriptive filenames, they are harder to "find." They don't jump out visually in the graph or in backlinks, but they are still present and available for exploration. The "label" style weak notes especially pique my interest when looking at a local graph… those are often great places to start discovering. 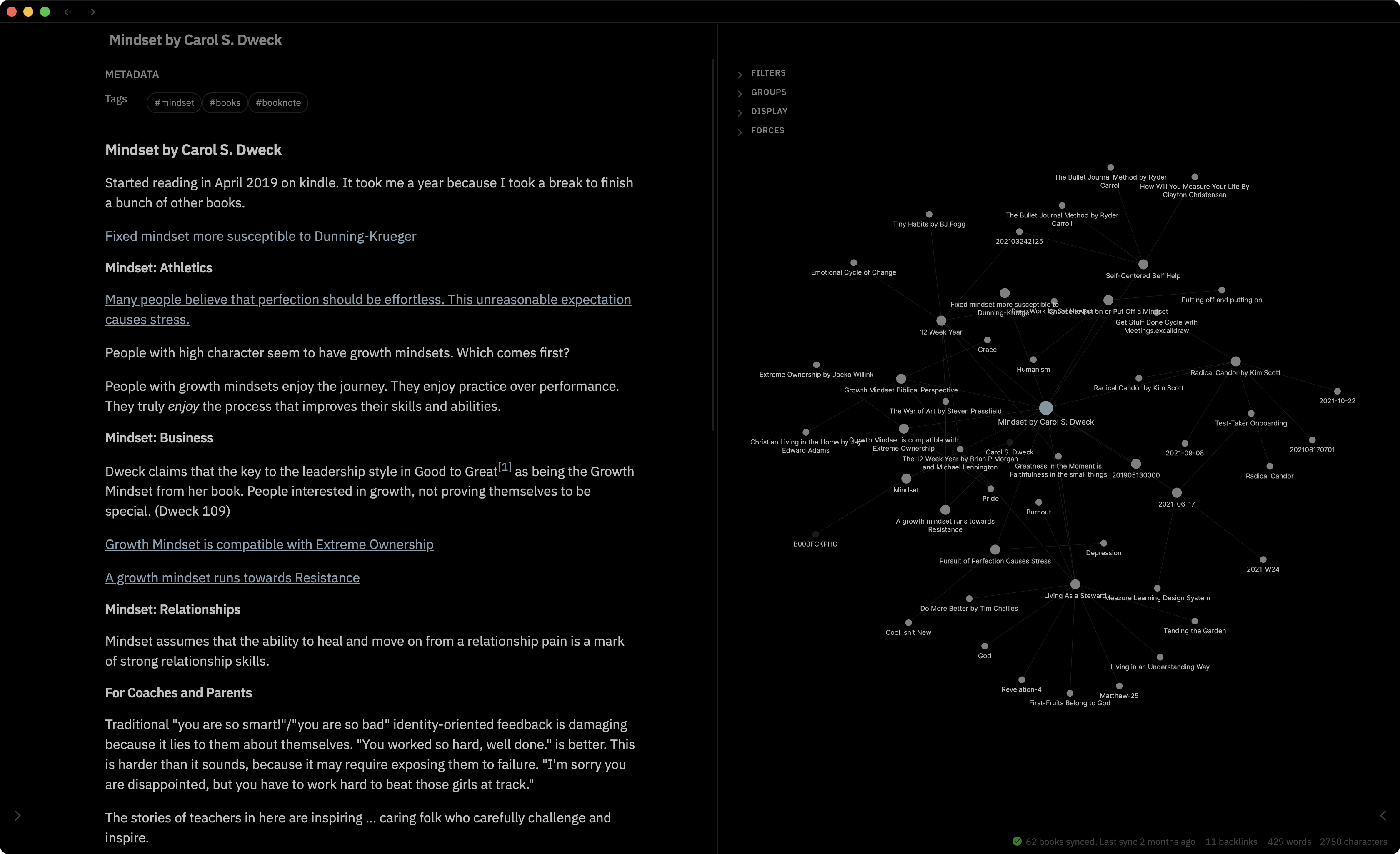 Occasionally while reviewing "weak" notes or zettels, I discover enough weak opinions to voltron into a strong fact or strong opinion. It's always exciting. It feels like being able to watch my thoughts forming. Seeing and experiencing externally the process of thinking has helped me reject some of those new hypotheses without mindlessly accepting them just based on frequency2.

An example of how all this all played together recently: making my way through 1 Samuel, I got to (one of the passages that amuses me the most) 1 Sam. 10:22:

So they inquired again of the LORD, "Is there a man still to come?" and the LORD said, "Behold, he has hidden himself among the baggage." (ESV)

I laughed as I usually do at the thought of the giant future king of israel hiding under blankets among the donkeys and camels... and the thought occurred to me: Was Saul's predominant failing Fear?

I jotted it into a zettel note, just a link to the Bible verse and a question:

Over the following weeks I continued to read about Saul, and logged six or more little notes on the same line of thought. As I noticed similarities, notes became linked. I started to notice that it wasn't just fear, it was specifically linked to Saul's fear of other's opinion. I eventually rewrote and reshaped the notes into a new Evergreen form based on my strong opinion: Saul was Dominated by Fear.

I'm sure my style and form will continue to develop over time. I am really glad to have stumbled across this idea of Note Lifecycle. I continue to see a version of this thinking in other people's Creativity Systems, and am stealing thinking about how to learn from them. 🤣