Hamilton is an Obnoxious Aggressive

I'm in the middle of reading Radical Candor by Kim Scott… so the quadrants of guidance labels are kind of floating at the top of my brain. As a quick recap: 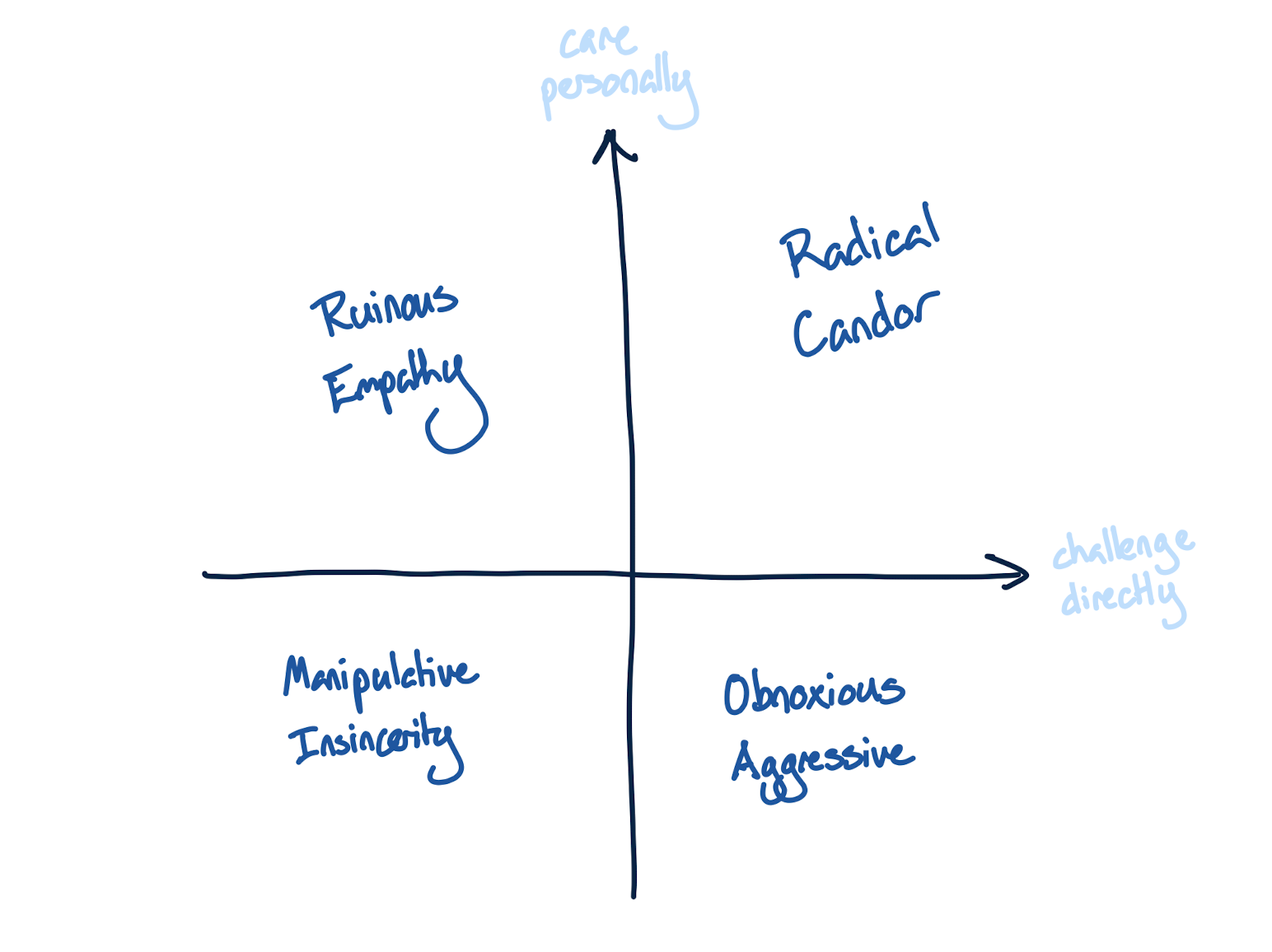 The ideal scenario is Radical Candor1, challenging directly while caring personally. The quickest way to understand the idea is to imagine a colleague entering the room with his fly down:

Radical Candor: immediately walks up, privately whispers: "Hey, your fly is down. You are good… nobody saw but me. You ok?"
Obnoxious Aggressive: Stretches and yells: "Hey, Davis! Your fly is down… fix it."
Manipulative Insincerity: Turns to their computer and direct messages ten colleagues: "Davis walked out with his fly down, lol."
Ruinous Empath: Freezes, and thinks "Oh no! I don't want to embarrass them, what if they hate me? Surely they'll realize it before walking into that board meeting… no one will notice!"

It honestly troubles me that the second most effective guidance style is Obnoxious Aggressive. Scott muses that this may be the "jerk's advantage": even without personal care a direct challenger is still effective as a leader… but may leave a trail of bodies in his wake.

Which brings me to our favorite ten-dollar founding father without a father… what's his name? I think you know…

Thinking about the obnoxious aggressive personality in the light of the like-able Hamilton has helped me understand a bit more. Obnoxious aggressive is an effective, if destructive, communication style and contributes to Hamilton's success. His frenemy, Burr, sings in frustration:

In contrast, Burr displays more "slick empathy" than the bombastic Hamilton, (who manages to out-brag and out-boast a cast of very forceful characters!) Burr's mantra struts into the forefront in his first interaction with Hamilton… providing some free advice:

This is the definition of what Scott calls Manipulative Insincerity. Someone who is able to get what they want by detecting emotional needs but playing them.

The show is full of characters shouting direct guidance… but Washington stands tall: His lyrics seem to embody the idea of Radical Candor: caring deeply, but challenging directly. His paternal relationship with Hamilton both recognizes Hamilton's deep need for approval and family and provides some examples of good guidance:

WASHINGTON
It’s alright, you want to fight, you’ve got a hunger. I was just like you when I was younger.
Head full of fantasies of dyin’ like a martyr?
HAMILTON Yes.
WASHINGTON
Dying is easy, young man. Living is harder.

With three of Kim Scott's labels covered I started searching the show for an example of the last quadrant of guidance: the Ruinous Empath. This is unfortunately the one I fall into the most. It's a bit of a stretch, but I feel the closest contender is Angelica in the show-stopping toast Satisfied:

I know my sister like I know my own mind
You will never find
Anyone as trusting or as kind
If I tell her that I love him she'd be silently resigned
He'd be mine
She would say, "I'm fine."
[Angelica and Company:]
She'd be lying.

Angelica knows the truth of how she feels. She can see the danger in Hamilton's character and position. Despite this she doesn't speak because she doesn't want to hurt Eliza's heart… setting in motion a course of events that will end with at least three broken hearts.

Every person loves the strengths and weaknesses of his personality type… and despises other types' weaknesses. I am sadly no exception. Hamilton is an excellent character to examine the "obnoxious aggressive" communication style: I can empathize with Hamilton's motivations that drive his communication, because the show shows us his internal struggles and frailties. I will keep on looking for different personality and communication styles in fiction… it's a good way to learn to recognize patterns without being emotionally affected by the actions.