A couple of weeks ago, I opened Overcast and saw an episode title that immediately grabbed me: The Memex.

The Memex is a fictional piece of hardware in an essay "As We May Think." The Memex predicts that as available knowledge becomes overwhelming, the critical task for a knowledge worker is to extend their own ability to access relevant information. The Memex anticipated technology advances and miniaturization to imagine a desk that could contain hundreds of tiny records, which could be projected onto a screen for the reader. In 1945, Bush described voice to text, document scanning, and hypertext documents.

I had become aware of the idea of the of the Memex through my reading and researching on note-taking and networked thought… it often gets referenced by Zettelkasten devotees. I had even mentioned it in a previous article… but until the Omnibus episode I was not aware of the remarkable life of Vannevar Bush, and some of the connections that were teased out by The Omnibus.

As I listened to Ken and John free-associate about this fantastic story… it reminded me of another scifi imagination experiment: The Knowledge Navigator.

Last December I attended a UX Vision Intensive, where I was re-exposed to this little piece of technology history. In 1987, a team at Apple made a video depicting a knowledge worker, sitting a desk, accessing interactive information through voice control. Sound familiar?

And there's a direct connection between the two. If you are a student of computing history, you won't be surprised by the name: Douglas Engelbart.

While a few of the connections here are conjecture and somewhat mythological, the power of a "scifi" User Experience Vision is evident. 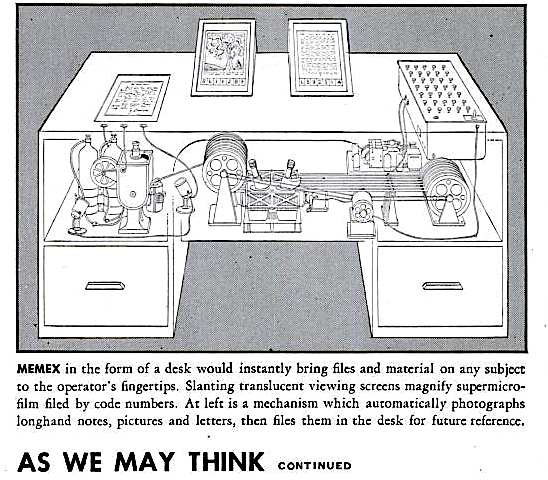 Consider a future device … in which an individual stores all his books, records, and communications, and which is mechanized so that it may be consulted with exceeding speed and flexibility. It is an enlarged intimate supplement to his memory.

(1961) Douglas Engelbart reads As We May Think

The pioneer of human–computer interaction Douglas Engelbart was inspired by Bush's proposal for a co-evolution between humans and machines. In a 1999 publication, Engelbart recollects that reading "As We May Think" in 1945 infected him with the idea of building a mechanism that could navigate and extend the pool of human knowledge. Around 1961, Engelbart re-read Bush's article and from 1962 onward Engelbart developed a series of technical designs.2

Engelbart's work at SRI didn't just stay there... the ideas and his collaborators spread throughout what would become the future of Silicon Valley.

Engelbart slipped into relative obscurity by the mid-1970s. As early as 1970, several of his researchers became alienated from him and left his organization for Xerox PARC, in part due to frustration, and in part due to differing views of the future of computing.4

Inspired by Engelbart's ideas, the engineers at Xerox had designed the Alto. At some point, a team from Apple came to visit this team.5

This is the most contentious connection in the story, mostly having to do with Apple-haters claiming theft or Apple-lovers claiming collaboration. Whatever the actual truth, there is definitely some kind of connection:

But a number of Apple engineers were already familiar with PARC, its work, or technologies like the mouse. Bill Atkinson had read about Smalltalk as an undergraduate. Some had worked at PARC: Jef Raskin spent time there during a sabbatical year at Stanford, and had a number of friends who were researchers there. Finally, there were even some Apple employees whose had learned about the mouse while working for Douglas Engelbart at SRI in the 1960s and early 1970s, or Tymshare in the later 1970s.6 (emphasis mine)

After the success of their early computers and looking to the future, Apple produces a video imagining a hypertext enabled computing object that sits on a desk, accesses information through voice commands, and supports a knowledge worker. (In this case, a rather surly professor.) The Knowledge Navigator shows a (then) impossible vision including:

That vision caught on, and they were able to keep it in their eye for 23 years until...

Apple co-founder Steve Jobs stated in a 1983 speech about the company:[9]

"[Our] strategy is really simple. What we want to do at Apple, is we want to put an incredibly great computer in a book that you can carry around with you and learn how to use in 20 minutes ... And we really want to do it with a radio link in it so you don't have to hook up to anything and you're in communication with all of these larger databases and other computers."7

But they weren't done yet...

The notion of Siri was firmly planted at Apple 25 years ago though “Knowledge Navigator” with the voice of the assistant was only a concept prototype.[2] In one of the videos, a man is seen asking the assistant to search for an article published 5 years before his time, the assistant finds it and tells the article being dated to 2006, and due to this we can conclude that the video is set to take place in September 2011. In October 2011, Apple relaunched Siri, a voice activated personal assistant software vaguely similar to that aspect of the Knowledge Navigator[5] just a month after their initial prediction.8

I'm fascinated at the staying power of this concept... the futuristic, scifi visions of The Memex, The Mother of All Demos, and the Knowledge Navigator form a chain of progress that leads to the device on which I wrote and researched most of this article. This device's capabilities were imagined in 1945... a vision of a potential future passed down for sixty-six years until it reaches my hands. 🤯