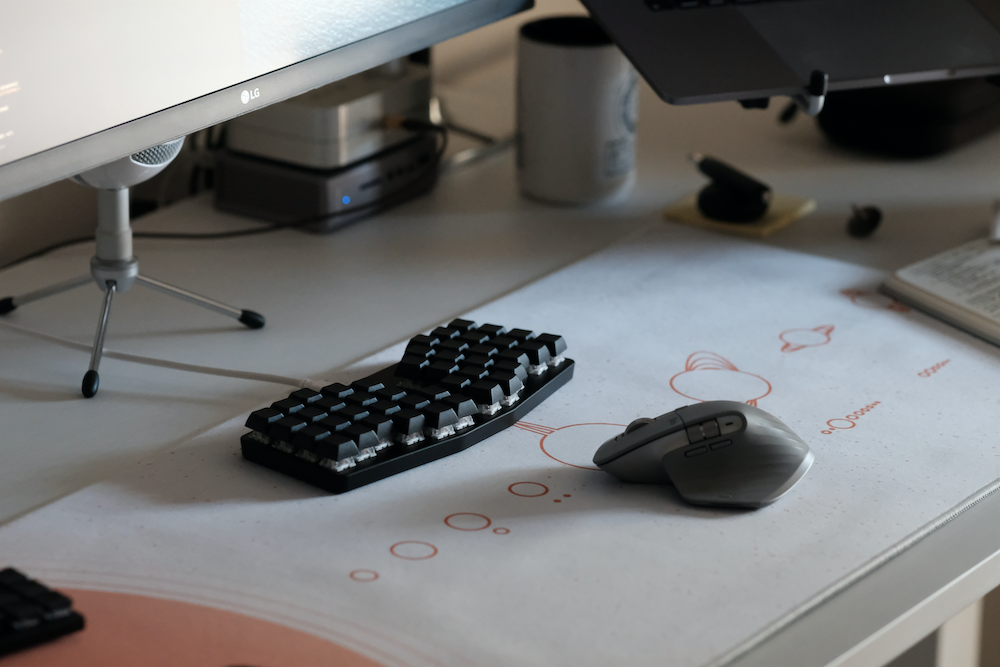 I currently type on MX Kailh Speed Copper and Gchocs from Gheavy Industries.

The feeling of mechanical switches is a deeply personal, subjective choice. For many, it's a fun hobby pursuit of some kind of typing experience, whether that's a sound, a tactile feel when the key hits… but if you are unwilling to spend lots of money outfitting boards1 it can be a bewildering and frustrating endeavor.

Because everyone assumes everyone wants the same thing, they forget to disclose what qualities they are looking for.2 I make my switch decisions on a couple, unscientific assumptions:

I originally tried to avoid "bottoming out"3 because Tom told me to. Later, I was trying to type more quietly on my already loud MX Blue 60% board. I discovered that if I could avoid bottoming out, 70% of the noise was diminished! By the time I had taught myself to type this way, some people couldn't believe I was typing on a "noisy" mechanical keyboard. I also noticed that my typing had become faster… although this could have been the result of deliberate practice.

When I first became interested in mechanical keyboards, it was pretty easy to find people who were interested in the same things: it was simply people who bought tactile switches. This has shifted in the last few years. Many of the popular tactile switches out there at the moment have a much stronger tactile moment than the venerable MX Brown and MX Clear. This stronger tactile moment is mostly for "feel," rather than providing a signal to "stop pressing" to the typist. This strong tactile moment requires a lot of force to overcome… therefore the finger is almost certainly going to travel the full length of the switch travel and "bottom out," producing a sound that others don't like. It is getting hard to find a switch that doesn't prioritize this ridiculously strong tactile moment.4

I know that there are non-MX switches that seem to appeal to people with the same sort of typing goals... there are Matias, ALPS, and Topre switches come to mind. I never wound up venturing down that path, so I can't speak to those. I have typed on a Topre board before, and I did like it, although at the time I didn't like it as much as the MX Clears that I had.

The classic. I really should order some more to occasionally throw on a hotswap board. The audible sound is lovely (and only happens on the travel down, unlike the clickbar options out there!) and provides a tactile moment that is sufficient to teach your brain to move to the next switch.

If you don't have a good typing style and a loud case, it can get your neighbors upset at you though.

The best non-blue option of the Cherry switches, IMHO. Heavier, but with a decided tactile moment that is strong enough to teach your fingers, but not too strong so that you burst through it and fall all the way to the bottom.

When I built my first custom, I was just going to put MX Clears on it, but I decided to try the fancy switches Reddit raved over.

These are still really nice switches. They are essentially MX Clear with a lighter spring and a cleaned up stem, apparently a mass-produced version of a frankenspring known as the "ergo clear."

Sadly, they don't make these anymore. The current version of Zealios don't have the same feeling.

The original version of this article detailed me buying around 200 switches of different varieties in order to try and find a worthy heir to my beloved Zealios V1. (Some of the losers in that race are below...)

The Originative MOD-M tactile is a pretty close substitute to the Zealios V1... and comes with a similar expensive price tag. They are both designed to be luxury "ergo clear" style switches. If you really want to try Zealios V1, this is the closest that I've been able to find on the market at the moment, although the "feel" of the switch is rougher.

Given that they are so expensive, I can't say that I recommend them at the moment.

My current favorite choc switch is linear. With a crazy low spring weight, you can't even really rest your hands on the keys for fear of typing. That being said, it's a very unique typing experience, and feels very fast and very easy. Being as the choc travel distance is so low, I tend to treat the light slap of the key at the bottom as the actuation point, and it feels relatively similar to a good MX tactile. It's weird, but it's good.

My current favorite MX Switch. Very high actuation point. Not terribly expensive. I owe this one to Arley McBain, he was right.

The Speed Copper has an extremely high actuation point, very early in travel. The spring experience is relatively light up until a definite tactile moment, then it gets quite heavy afterwards. This "cushion" really helps with not bottoming out, and doesn't feel bad at all.

I've been typing on them 100% for the two weeks since I got them, comparing them back and forth with the Zealio V1 I have left and the Originative MOD-Ms I had saved to put on the Atreus. The MOD-Ms are going back in the bag to be sold. 🤷‍♂️

The tactile moment is just not pronounced enough for me to really tell that it's there.

Zeal knows how to make pleasant switches. They are freaky silent, smooth and nice... I just don't like the spring/tactile experience. It starts out heavy, hits the tactile moment, then gets too light so that you crash right through to the bottom. In addition, the bump is very sharp feeling. I liked the "roundness" of the MX Clear bump, it taught your finger that it was approaching actuation, not slapped it as you went past.

These switches are technically tactile, but honestly the total switch travel of the kailh low-profile "choc" switch is so short that you can't feel it unless you are trying really hard.

The switch's spring is strong enough for my fingers to learn how to type on it without bottoming out, but honestly it's a bit strong for the tiny keyboards on which I tend to put chocs.

These feel just like silenced lubed MX Browns, which is basically what they are. I couldn't feel the tactile moment.

The bump is basically at the top, and is more of a resistance than an actual bump at the actuation point. I did't like these at all. They are heavy, stiff, and don't really emulate clears or zeals. They almost feel like really really heavy linears. I will say that the force curve does seem to lean towards keeping a person from bottoming out, and I think that with some practice I could keep from bottoming out entirely.

I'm pretty happy with the combination of switches that I have at the moment. I am floating somewhere between 105-115 wpm on quotes on monkey-type.com at the moment.

As with all endeavors... buying things won't make you faster or better, you can achieve much higher speeds than that with an old dell membrane keyboard. Deliberate practice > buying tools... but if you have to buy tools, I'll try to help. :)