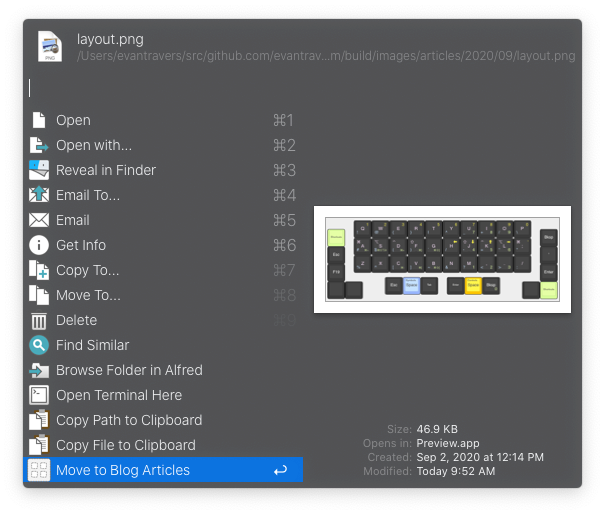 This automation is really ugly, but it makes my life so much easier. Automation can make you faster, but it can also make you more consistent.

When I’m working on a blog post, I’m frequently pulling airdropped photos from my phone, screenshots, and random illustrations to put in the current draft. All these artifacts need to go to the right folder in my git repo.

The correct file location for an image (for me!) is:

Especially early in the month, that folder doesn’t always exist. Worse, it has duplicates in both the source and build folders of my static site… so it’s often hard to find the right folder even using Alfred’s fast file search. I usually end up typing the name of a recent image, opening the containing folder in Finder, then navigating and doing it manually. I’d often put the image in build instead of source, or other mistakes.

I finally wrote a tiny script and added it as an Alfred Workflow as a File Action. That means if I select any file on my computer or find it in Alfred, then hit Tab to act on it, I can select my workflow with speed.

And the bash script is stupid and simple.1

Now… no matter whether the folder exists, and no matter how I find the image… it’s a one keypress away from being in exactly the right place. 👍