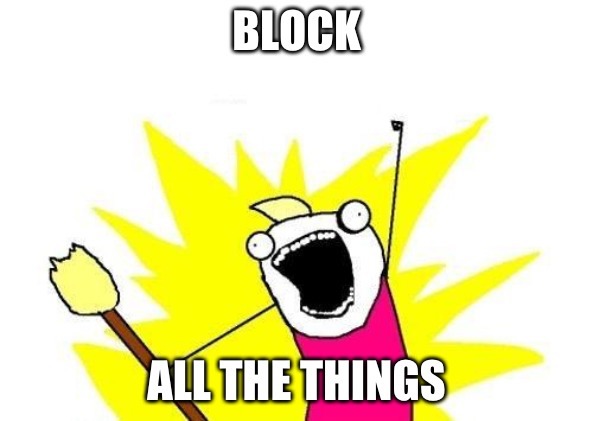 Headspace: Block All The Things!

Pretty much as soon as I had finished the series on Hammerspoon, I knew I wanted to take the Headspace project further. At that point, it would block opening or switching to an application via the Hyper shortcuts I had defined earlier, but if you opened an application via Finder, Spotlight, or another launcher like Alfred… I could get around my little system.

My fingers started building the new neural pathways to get around my own boundaries immediately. So it's time to… BLOCK ALL THE THINGS! * ahem *

I had actually taken a couple stabs at the universal blocking before I finished the blog post. I had a pretty good idea that I'd be using the hs.application.watcher to track what applications had launched, but I could not get it to work.

After a lot of back and forth and some debugging, I eventually realized that I was tripping over Lua's garbage collection. I had instantiated the watcher, but in the local context of a lua module1. This meant that after the function had been called first time, the watcher's object was garbage collected and destroyed.2 I eventually "hoisted" the watcher out to the global namespace like this:

Another advantage to this migration is that now headspace.lua is not dependent at all on hyper.lua. You can trigger the Headspace UI any way you like. I have thought about rewriting it as an official Hammerspoon Spoon, but I am not sure if anyone really wants that.

While I was working on it, I added another feature: you can now define a teardown function for a space. The teardown function fires when the space is exited, and I use it to "undo" things. For instance, when I enter my Communication space, I filter Things.app to the set of to-dos related to communicating. When I leave Communication, I want to see my normal "Today" view, and that's easy enough to implement.

I've been using the new Headspace for the past month or so, and it has been really stable. I may end up choosing to use a non-native notification method eventually, just as I tend to turn on Do Not Disturb mode, which effectively blocks Headspace from telling me what it's doing. As it is, I haven't made any major changes to it in a while, mostly just aesthetic changes to the time tracker and adjusting the blocking lists for various spaces.

If you want to give Headspace a try, you can! Here is a minimum viable init.lua for starting to tinker and build your own setup.

That's it! I did some smoke testing on my own system to make sure that this works, but I am (most likely) forgetting something. I realize that this is still really confusing, so if you want to give this a whirl, please reach out and I'll be happy to help you. 🙏

You can always take more inspiration from my ever evolving configuration at my github.