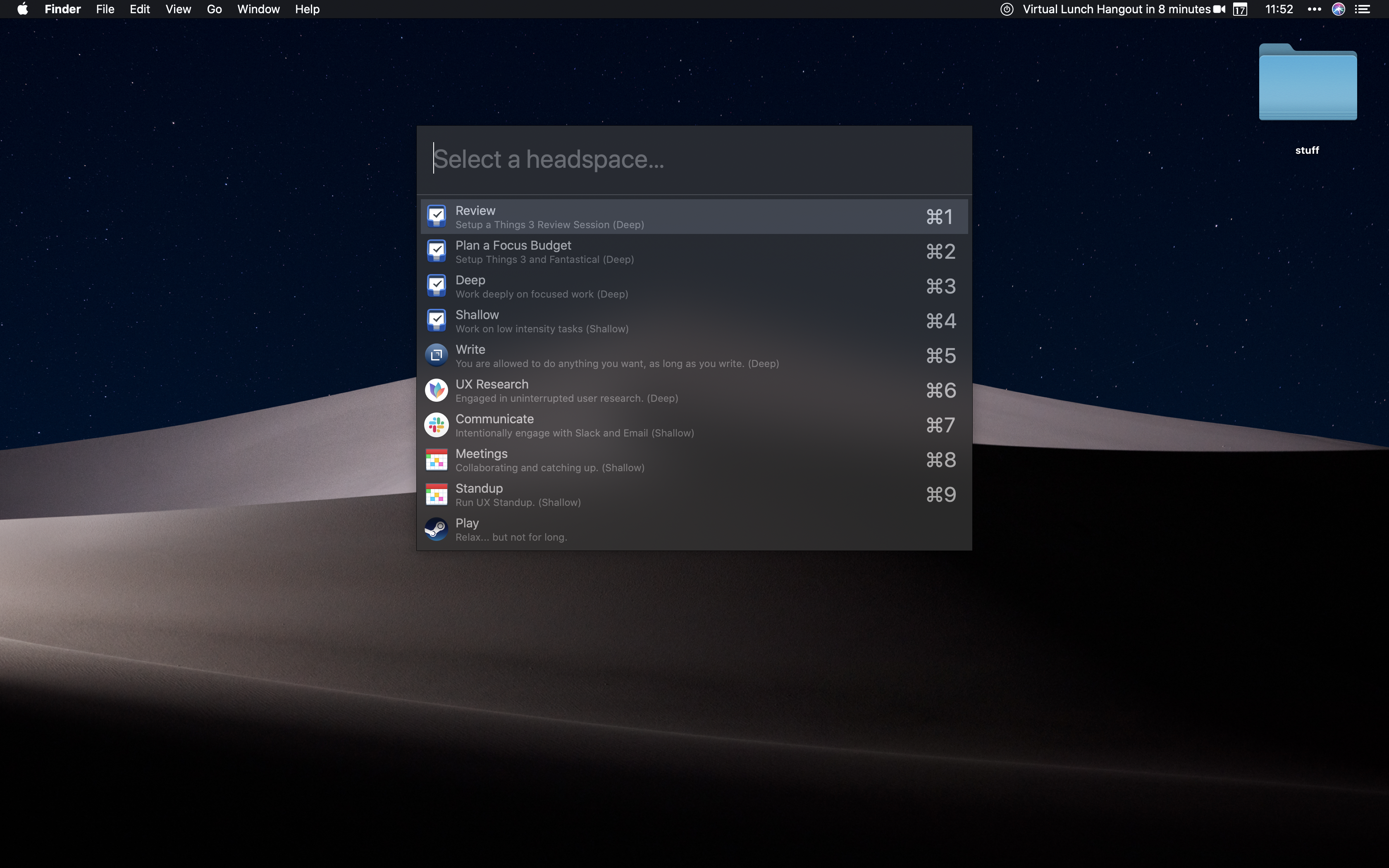 I am very excited about this post... I'm pretty sure that I've been working on it alongside the name-sake tool for a straight month.

Headspace has been the title of this series, and it's what I call the last automation in this series. Let's jump straight into it with a demo.

I've been using Headspace daily for about a month. I love it. I am sure that you could create something very similar using a variety of automation tools. Build your own version or clone mine!

How Headspace Came to Be

After writing the "split window" function, I realized there were window layouts I preferred for specific tasks… starting with my daily review in Things 3, but also my daily standup.

To have an idea of the complexity of one of these tasks: Every work weekday at 4:30p in order to perform my Daily Review…1

In early May, I started to write a simple "layout chooser". I started with a hs.chooser, and just had it wired to functions that moved around windows and set up the windows in my workspace the way I wanted it. I realized that since I'm writing a function for a specific task, then I know the time tracking data for that task. I could automate my time tracking as well! I wrote the first curl-based version of my toggl.lua script and threw a toggl.start() call in the setup function.

Within a couple minutes or hacking, I had a button than when pressed could rearrange my computer into one of two "scenes," which immediately set up my workspace and started the correct toggl timer. I pressed one key, chose my task, and started to work.

I realized that choosing a space was a statement of intentionality. Headspace had become a tool that cleared the space for me to focus on my intent, and automatically removed obstacles.

I had been really interested in the idea or having different spaces for productivity, since I had seen Spaceship You and heard CGP Grey's additional commentary on the topic in Cortex Ep. 102.

As I already was copying Grey's use of toggl to track my whole work day, I realized I could build a tool of spatial intentionality. Removing distraction, staying focused, and tracking how much time I spend moving the needle.

I started adding entries for time tracking every major modality of work that I do daily, even if it didn't require a special window layout. I already had been using projects in Toggl for this, so I just copied them into Headspace. I used it for a week with just the major modalities I had created, occasionally flipping over to the standard toggl.app to enter a custom description for a timer.

The ability to open any application with a single keypress is awesomely… distracting.

I wrote a modification to hyper.lua that blocked applications had had declared should never be in this space. You can still manually go launch them, but that little nudge helps me stay on task and not open Slack just to tell a friend a cool thing I did in Hammerspoon. 😛

I overloaded the placeholder text for the hs.chooser so that if there's a currently running timer, I can see what my current intention. This often keeps me on track. Because the "allowed applications" is tied to a space, if I want to freely use Slack or Email, I have to look at my intention in the timer first before I change the headspace. I have found myself starting to stay the course and finish the work. 👌

I also rewrote the hs.chooser callback so that anything you type can be started as a toggl timer. I can now use just Headspace for all time tracking, only running toggl.app for the Timeline feature.

Not bouncing back and forth between headspaces.lua for presets and Toggl.app for custom means that my time-tracking has become more consistent and painless.

It was really fun to write this. I was working on this while using it… so I was UX lead, developer, and customer all in one. My passion is making tools, and this one has been very satisfying to create.

Full disclosure... this is largely solving a problem of my own making. Automations like the Hyper key, combined with a decade of not valuing the practice of sustained intentionality2 means that it's easy for my monkey brain to run away and be distracted.

That being said, I do not think I'm alone in this. Several thinkers in the space (Shawn Blanc3, Mike Hurley and CGP Grey, David Sparks and Mike Schmidt, Rosemary Orchard, etc.) have all talked about how they love using their iPad as a tool of focus, because iPad OS is a "single-tasking" OS. In some ways, I'm attempting to emulate that on a multi-tasking Macbook Pro, but on my terms. I can turn it on and off.

Blocking my custom hyper-key shortcuts was incredibly frustrating for the first week or so. I occasionally got physically angry at my computer. "Why won't you do what I tell you!!!! oh. yeah. I said I was focusing."

I have found that this effort is slowly re-wiring my brain into putting those distracting urgent messages and "just-checks"4 into Things.app tasks and Drafts.app. I may even attempt to automate this, where if I try to access an app that is blocked, just open a Drafts.app draft with some context about the time, context, and the app I had just tried to access.

My time-tracking is much more consistent, and honest. At the moment, I don't have a "stop" timer setup until the shutdown routine space that I run at the end of my day. That means I'm always running a timer. My fallback timer is Communication. It's accurate enough for now: I enter a "focused space" like Writing or Research and distractions and communication applications are blocked. When I'm done, I leave the focused space (stopping that timer) and I'm in Communication which everything is allowed, and I'm checking in with my team... it's pretty accurate to what I do now.

I think in the future I'd like to be more intentional, spend more time in focus-type blocks and less time in communication/distraction. But I have the flexibility to redesign headspace to nudge me in the right direction.

Here's a simple "space" definition in "deep.lua" that I show in the demo video.

For a given space, I build a table for the hs.chooser, passing in information for toggl.com, and tags that I want to block/enable.

If I want to enable more complex actions, I can define a "setup" function. I can do pretty much anything in there.

This tool has me re-thinking my computer usage. Pretty much anytime I find myself doing the same thing over and over I stop and encode it into my system. I keep hiding the UI of Drafts.app for minimalistic writing? Encode that into Write. Always open the same windows in the same places each time I run standup? Encode that into Standup.

It may not save me all that much time, but I have to imagine that every small piece of friction removed is hopefully making the way for useful work. It certainly gives me joy... every time I punch in my standup and it sets itself up for me so that all I do is hit "Join Call?" I grin like a fool every time.

Where is this headed?

Well, I can't stop tinkering. It's been changing as I write this blog post. 🤷

I am still tweaking my toggl project to headspace relationship as I begin to understand my own work and behavior, I am trying to track and encourage spending my time in meaningful ways.

I'll probably attempt to write a tool to set automatic timers/limits on how much time I spend in certain spaces. I spent way too much time just in Communication mode, and I like the idea of having measured work blocks where I can trust my system to give me breaks at intervals.

I think this series is basically done, but it has led me down some neat automation rabbit holes that I'll probably feature in standalone posts. For now, you can peek into my spaces folder and see how I'm classifying my work. Maybe you'll get some ideas for your own automations.

I don't really expect anyone else to try this... but if you do: please shoot me an email or create a github issue. If there's enough interest, I'll submodule out headspace to be it's own Spoon or something.

If you really want to try Headspace and doesn't want to code up some lua, I'll either help you, or try to hack together a control panel using hs.dialog so that it is self-configurable with a UI.