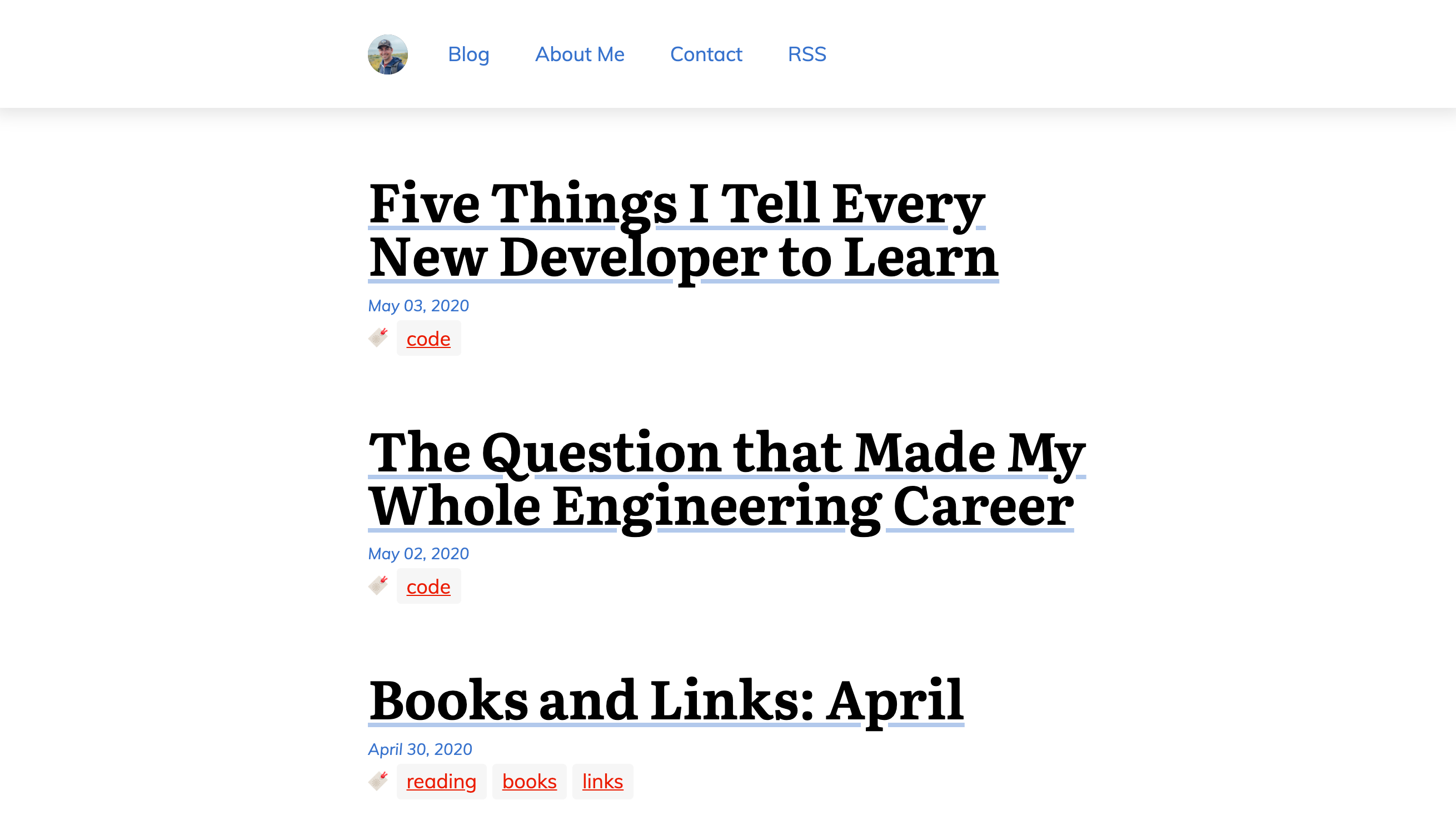 Time for a redesign...

I started jonesing for a change, so I've been hacking away at nights on a minor redesign. I'm pretty happy with the final result. I think it's reasonably readable and usable, but I honestly think the overall effect is pretty boring and generic. 😜 I will certainly be reworking some pages over time. I'm not super pleased with the dark mode at the moment...it lacks character. There are also some small tweaks I need to make in order for it to be as accessible as I would like.

While we are here, here's a cherry-picked tour of some of the old designs!

(Btw, it's unreasonably hard to go back in time in an old ruby project... not sure how I feel about that.)

The first public iteration of this site. I had been using blogger, then later custom tumblr themes for my sites. I decided to finally man up and wound up building this site in Middleman. Eight years on the same codebase!

I wrote this version using Zurb's Foundation css framework in Slim. I think I was also hosting it on heroku. 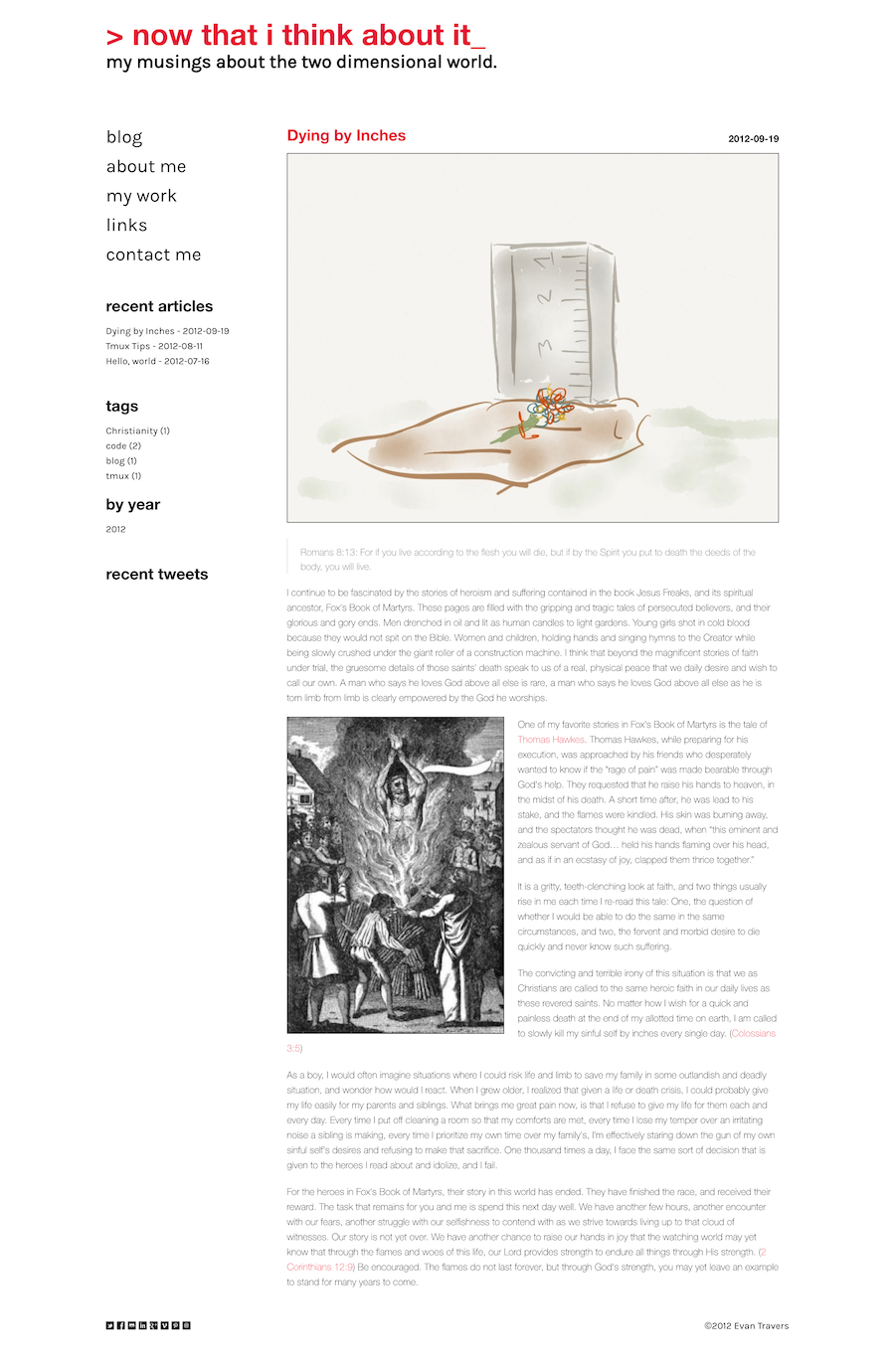 I think this version had some visual homage to old versions of both csswizardry and Smashing Magazine. 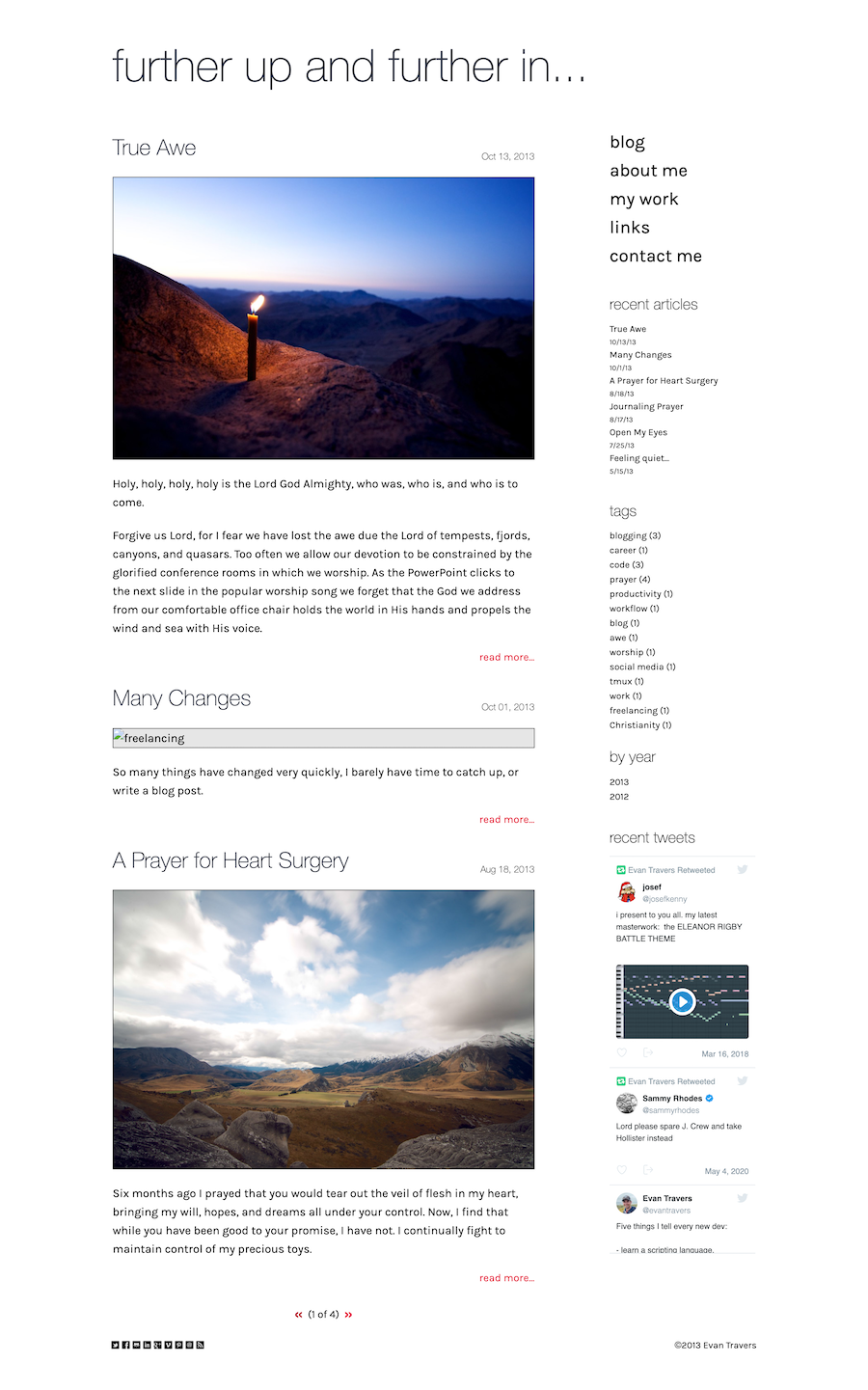 Here we have a minor font change, and I reversed the direction of everything. I think at this point I was still using Zurb's Foundation for the grid system.

I actually really like the big images with the border, I could see myself going back to that someday. They kind of pop.

Here I finally started using static sites for what they were designed, and deployed this bad boy to Amazon S3... where it has cost me about a dollar a month since. :P

At some point, I had been using Bourbon.io's Neat framework, and I rebuilt my blog using that. 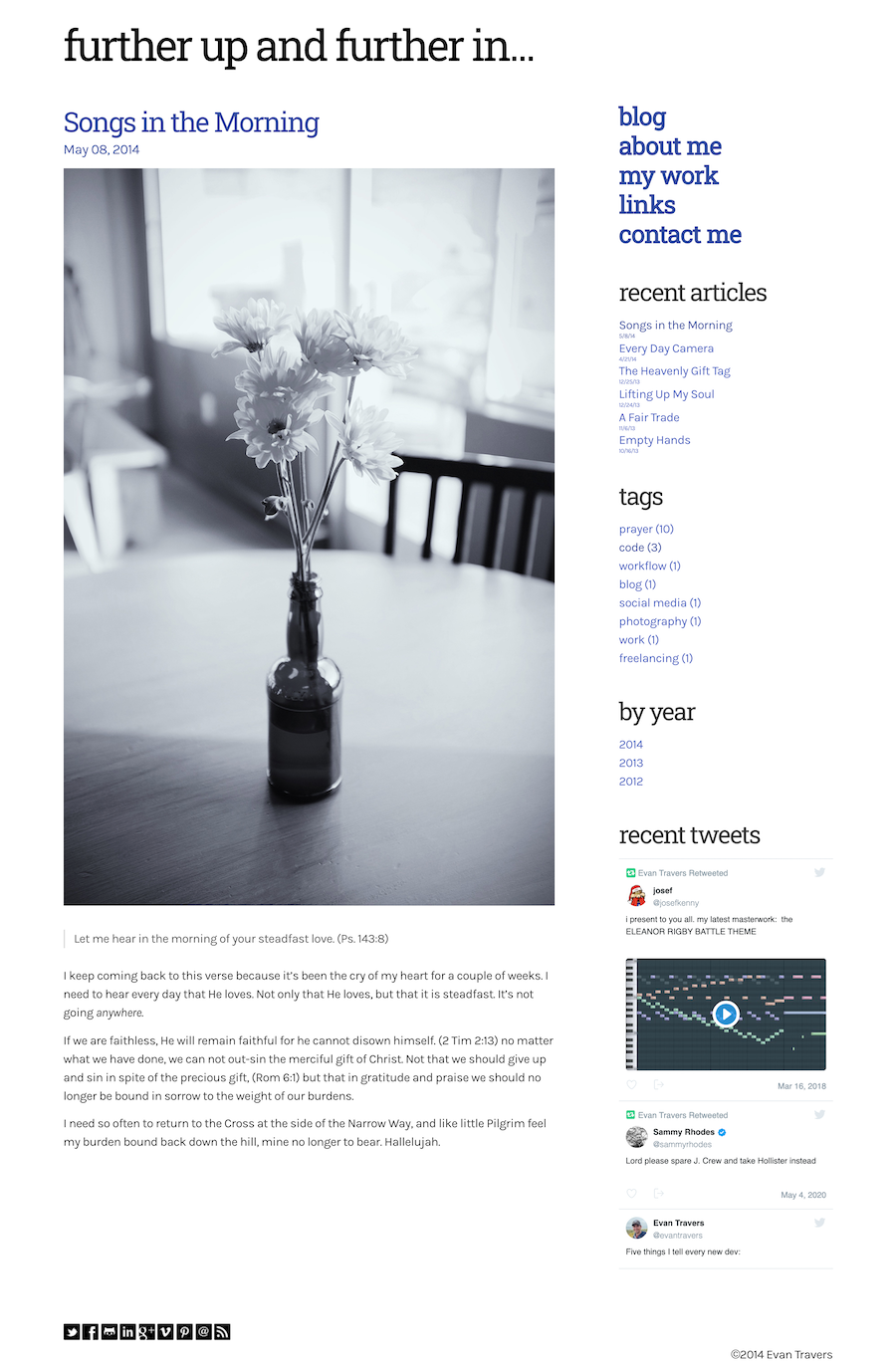 Pretty much a clone of the previous site, just with better CSS.

Somewhere in here I started doing one-off pages like a resume and an essay on git.

Somewhere in 2015 I stripped away everything and made it as simple as possible. The index page lost pagination, everything. Just a list of articles. 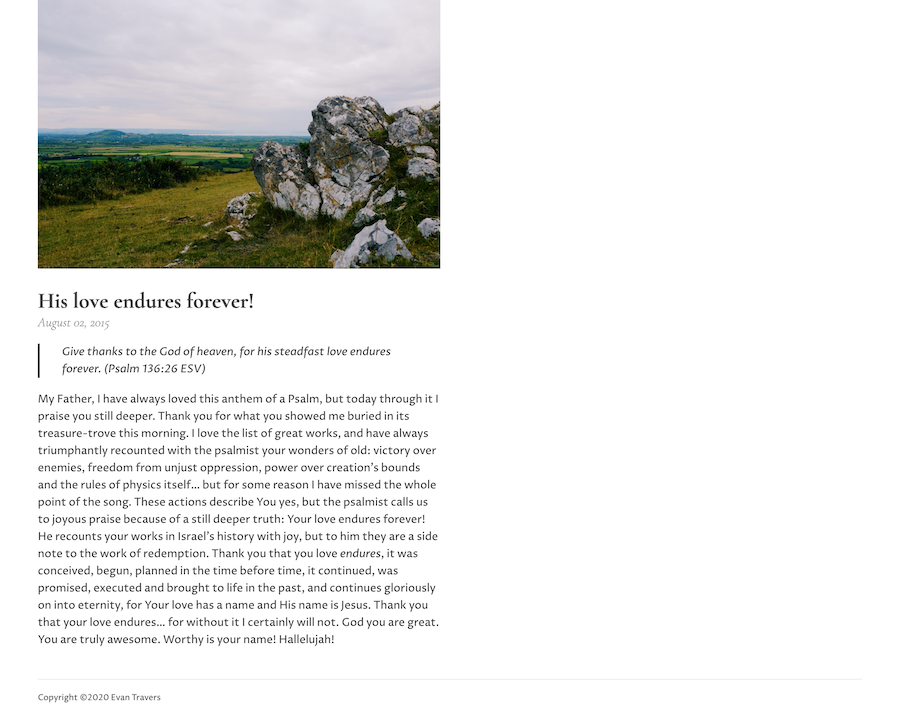 The site got abandoned for a while... I posted nothing for all 2016! I think it was a combination of work, instagram, and getting to know a cute girl. :P 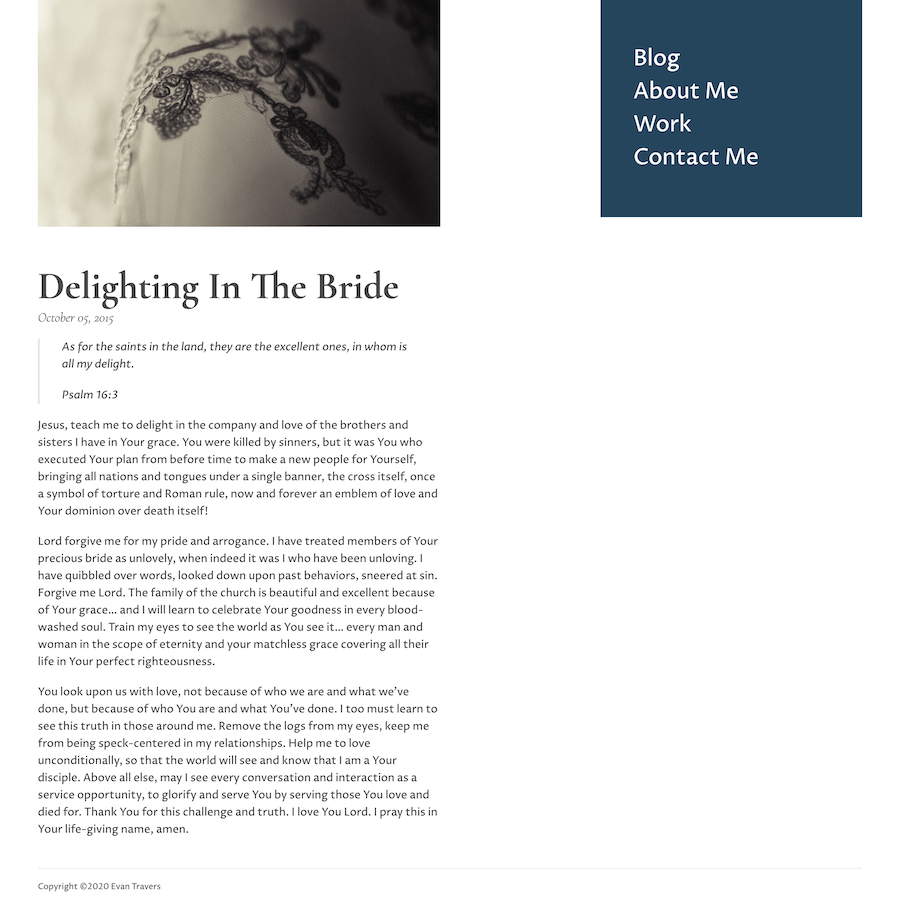 The site was reborn in 2017, just added some navigation, started working on mobile interfaces.

At some point in 2018 to 2019, I started writing much more often. I added features related to what I was writing: footnotes, changelogs, <figure>s with <figcaption>, comments via IndieWeb. Mostly I just wrote posts.

I haven't found the exact series of commits, but I redesigned around the time I implemented the first dark-mode. 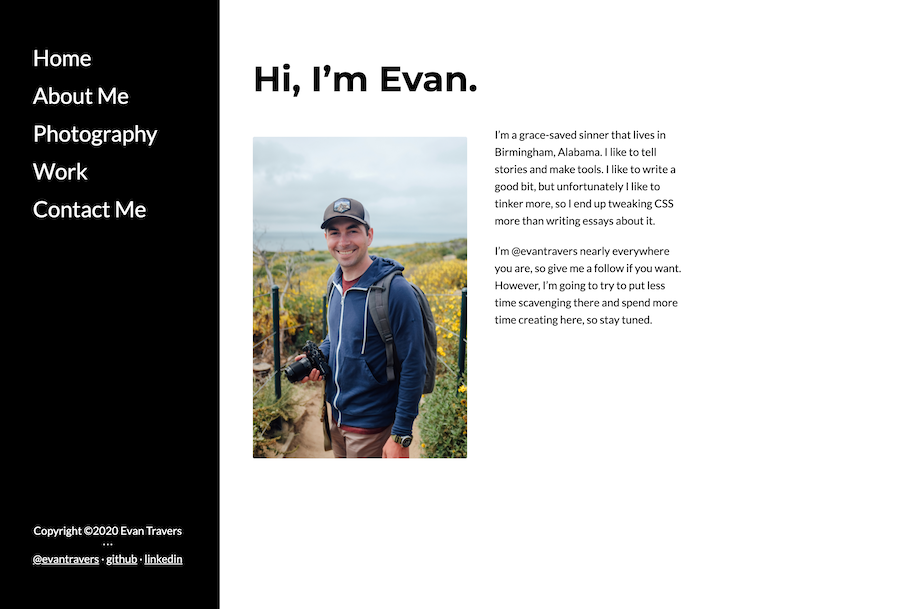 This version finally had a more usable mobile menu that went through several redesigns, starting with the "checkbox trick" and then later using <details>.

I rewrote the whole thing in CSS grid, using some of the cooler new features like grid-column-start to move the footer out of the sidebar into the footer in the mobile version. Very cool.

In 2013, I posted some screenshots of my very first websites in high school.

Anyway... I hope you have enjoyed this jaunt through my iteration. Putting this together was mostly for me, and it has made me laugh a lot at what I used to think was cool, and it's interesting to see how my concept of myself as a writer has changed over time. The site has moved from being a hub of all the disparate networks I used to being an independent voice, the main place I express myself, and I am pretty doggone proud of that.