Pretty crazy month, personally and professionally. At this moment though, I am content and grateful. God is good.

Lean UX is the practice of bringing the true nature of a product to light faster, in a collaborative, cross-functional way that reduces the emphasis on thorough documentation while increasing the focus on building a shared understanding of the actual product experience being designed.

Begun in June. Finished two days before class with Josh Seiden in July.

This is a reference cookbook defining a collaborative, agile process called Lean UX. Given the current challenges I face at work… this book is a challenge. It’s hard to read at the moment without coming up with all the reasons that this can’t work for me.

I think that I need to take a refresher skim or pass through the notes with an eye towards “what can I learn from this?”

I was directly challenged in many ways... I tend to over-design or over-engineer, which is properly condemned in this book. It also points out that in my present role as a UX practitioner, I need to focus and hone my skills as facilitating collaborative exercises.

Across the Fence by John Stryker Myer

I heard about this one on the Jocko podcast.

Setting that record was a draining, often deadly exercise that ran like this: As the team leader, I’d get a target in the morning. Covey would pick primary, secondary and alternate LZs. The team would load up on the Kingbees, go into the primary LZ and get shot out of it. Then we’d get shot out of the secondary and alternate sites. Because the flights to the Prairie Fire AO were so long, we’d have to fly back to Phu Bai, refuel, eat lunch, get another target and try it again with identical results in the afternoon.

This book is a fascinating look at some brave young men. It's an exercise in doing more by doing less (I'm still working my slow way through Essentialism) and in bravery. I recommend listening to the podcast episodes with Mr. Meyer, pretty humbling stuff.

It's been hard to wuss out of workouts while listening to what they did and endured.

There's a lot this week... I deleted games off my phone, so a lot more podcasts and links were read.

There's some themes here... so I'm going to take the liberty of trying out categories for the links. (It's my blog, my rules!)

The case against lawns

Lawns, by acreage, are the nation’s largest irrigated crop, surpassing corn. Lawns consume resources, including fresh water (especially in those lawns cultivated in desert climes), fertilizer, pesticides and other chemicals, fossil fuels for mowing, and a mind-numbing amount of time, on an immense scale. Much hand-wringing goes on about the use of pesticides in industrial farming and the effect it has had on the worldwide population of pollinators, but less about its destructive use in lawn care. Lawns have introduced some of the country’s most invasive species, including English ivy, Japanese and Chinese wisteria, and decorative trees such as princess tree, Bradford pear, and mimosa. Second only to deforestation, invasive species are the largest threat to the world’s biodiversity.

And all this for what?

I'm a fan of Kate's blog McMansion Hell... and this is great too.

I know this has been making the rounds for a while, but it is very well written.

In the eyes of regulators, privacy still means what it did in the eighteenth century—protecting specific categories of personal data, or communications between individuals, from unauthorized disclosure. Third parties that are given access to our personal data have a duty to protect it, and to the extent that they discharge this duty, they are respecting our privacy.

Seen in this light, the giant tech companies can make a credible claim to be the defenders of privacy, just like a dragon can truthfully boast that it is good at protecting its hoard of gold. Nobody spends more money securing user data, or does it more effectively, than Facebook and Google.

The question we need to ask is not whether our data is safe, but why there is suddenly so much of it that needs protecting. The problem with the dragon, after all, is not its stockpile stewardship, but its appetite.

I don't agree 100% with the author's assertions about environmentalism, and the related conceit that only federal regulation can save us, but the comparison to this new world of privacy/data is intriguing.

Our discourse around privacy needs to expand to address foundational questions about the role of automation: To what extent is living in a surveillance-saturated world compatible with pluralism and democracy? What are the consequences of raising a generation of children whose every action feeds into a corporate database? What does it mean to be manipulated from an early age by machine learning algorithms that adaptively learn to shape our behavior?

That is not the conversation Facebook or Google want us to have. Their totalizing vision is of a world with no ambient privacy and strong data protections, dominated by the few companies that can manage to hoard information at a planetary scale. They correctly see the new round of privacy laws as a weapon to deploy against smaller rivals, further consolidating their control over the algorithmic panopticon.

The Drug Revolution That No One Can Stop - Matter - Medium

This is I'm sure a little overblown, but a little scary. 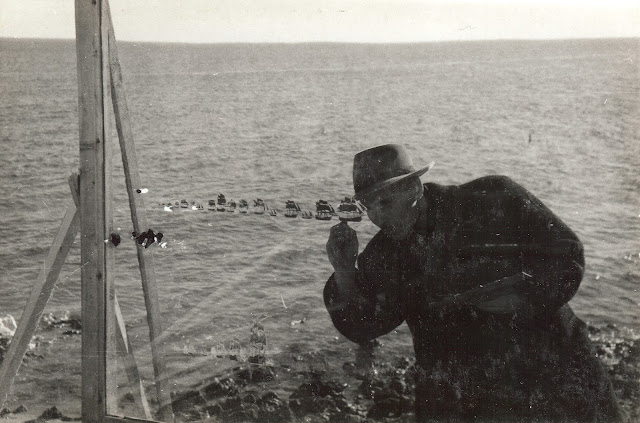 I recently acquired a spectacular series of 30 photographs documenting the shooting of miniature ship effects for an unknown Russian film.

Wonderful weird insight into the way that films used to be made... and really still are.

Thread by @foone on Kodak's History

non-calendar reasons why Kodak is weird: They discovered something in 1946 that wasn't publicly known and was supposed to be top secret. And they sued the government over it.

Super fascinating exploration of a bizarre and awesome company.

When Should You Start a New Note? • Zettelkasten Method

The best answer I can come up with is pragmatic: when getting information out of a note takes too long, it’s not a well-written note. Rephrase it or split it…

I'm doing a lot of researching about note-taking, and specifically this esoteric system called zettelkasten.

You Only Find What You Have Identified • Zettelkasten Method

The objective of a Zettelkasten note archive is to store notes and allow connections. Both are necessary to extend our mind and memory. As long as the software you use doesn’t provide any means to create links between notes, you have to come up with your own convention. Even if the software did provide such a mechanism, I’d suggest you think twice about relying on it: I want to evade vendor lock-in for my Zettelkasten, and I think you should, too. So let’s assume you don’t care about the software and create your own hyperlink scheme.

I've been scouring the internet for more information about this method... this is the first article that is starting to make sense.

There’s a thing called “Zettelkasten”, and then there’s you using it. The former is the toolkit, the latter is your application of a method.

I recognize the following pieces:

This article is going to be very formative to the vimwiki final blogpost...

Don’t just expect that you can understand yourself in a couple of years. At least I had some difficulty to do so. Make it easy for your future self.

To build a better understanding of the framework and how all of its moving pieces interact, let’s strip Phoenix down to its bare bones. Let’s start from zero and slowly build up to a minimum viable Phoenix application.

This was a very enjoyable code-along for those like me who are learning a little about Phoenix.

Breaking Out With CSS Grid Layout

I read this while researching for the sidebar feature I wanted to add to the blog... great guide although I'm trying to keep it simpler around here.

Part 3 in an ongoing series about web history Chapter 1: First Things First, What is the Web? Chapter 2: How the Web Spread When No One Knew What it Was Chapter…

This book is a guide to how we do product development at Basecamp. It’s also a toolbox full of techniques that you can apply in your own way to your own process.

As is widely touted, basecamp published their development process. I'm sure it's not a one size fits all, but it's an interesting artifact dedicated to Doing Work Well.

One Month Without a Smartphone

It took me a solid three weeks to truly not miss my smartphone.

I think I will have to try this at some point.

According to Daniel Goleman, author of Focus: The Hidden Power of Excellence, there are actually only two kinds of distraction:

One month with a dumbed down phone • chrisbowler.com

It’s been one month since I turned my phone into a device that, for the most part, does not give me any new content. No email, no social media, no RSS, and not even any work communication. A few people have asked how it’s going.

In a word, lovely. Absolutely lovely.

How to Restore Margin

I am so excited to learn more about this and pretty sure that I want to subscribe to this course. With each new responsibility of marriage, family, home... the difficulty of claiming and protecting margin grows. Time to learn the lesson while it is "easy."

HPG is one of my favorite outdoor brands... and as much as I have read and thought about gear, this video still taught me some new ways of classifying backpacking gear and ways to think about insulation.