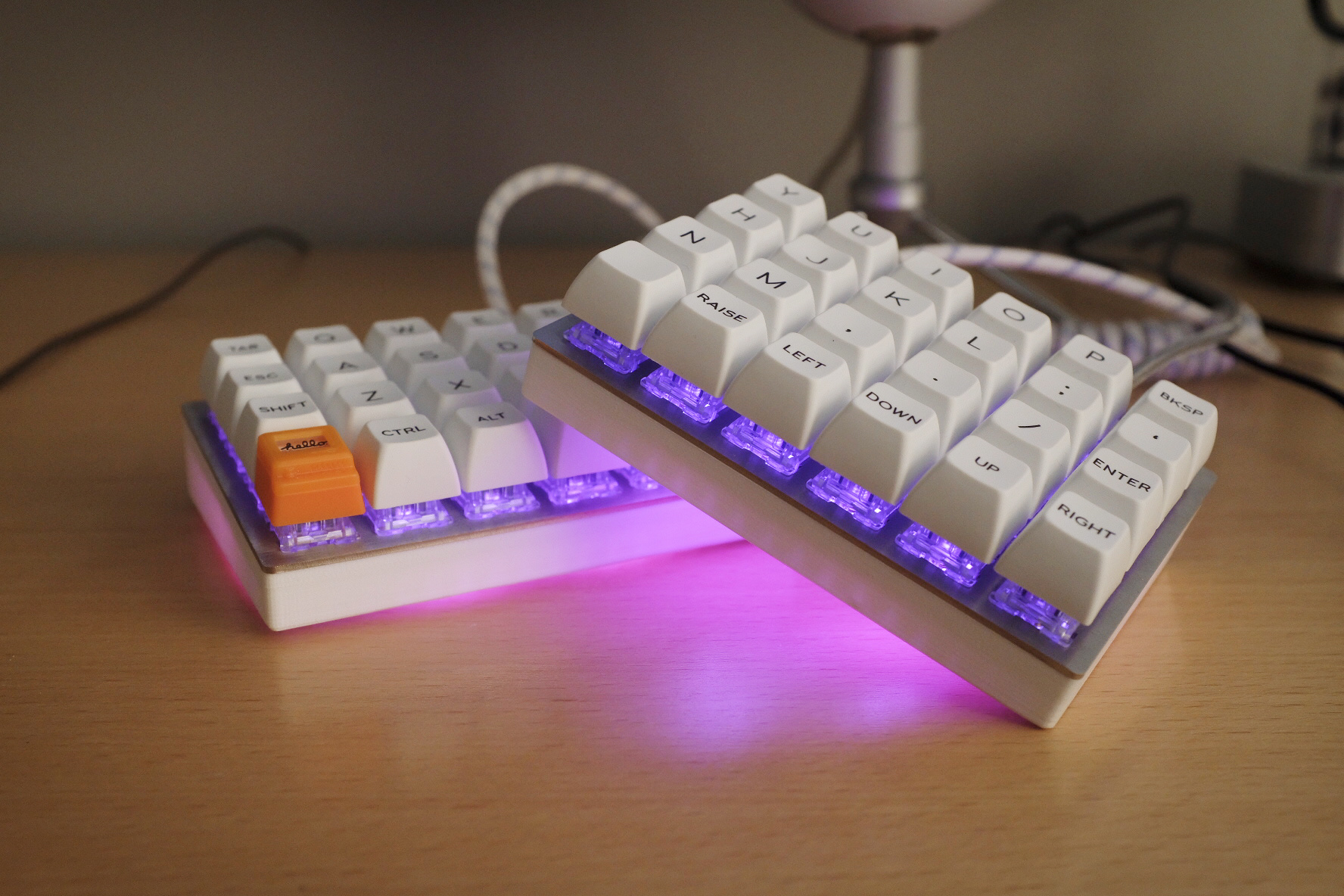 I Built a Keyboard

I have been using mechanical keyboards since college... it's just nice to have a good tool to do my best work on. The best comparison I can give is musical... regardless of your skill level as a musician, there's a difference in feel and ability when you handle a truly nice instrument. The same is true of a good keyboard. My accuracy, speed, and comfort are improved by a predictable, consistent keypress. I started out with a WASD with MX Blues, then had a WASD with MX Browns (after coworkers complained about the noise!). I eventually settled on a work Pok3r with MX Clears, which I have been using for years until I bought the Planck Light off of Massdrop.

The Planck quickly became my main board, and I sold all my other boards off to fund more ortholinear projects. I have really come to love the ortholinear layout and ability to program and customize my own key maps and macros. The theory behind ortholinear is two-fold: First, a simple grid is easier to hack and put clever things into, like a tenkey. Second, the grid allows your fingers to move up and down the whole board. I used to hit pretty much every modifier except shift with my thumb, now I'm using my whole hand and my thumb RSI is getting a little reprieve.

Even before the keyboard arrived, I was starting to tweak and design a split layout. QMK even let me use the same layout on my Planck light that I will use on my split, and any changes I make can go back and forth between the two! As a UX designer and a software engineer, being able to customize and tailor my main tool to my exact needs is really fun and satisfying. For instance, I use Sketch.app at work for UI designs, and I was able to put a macro layer on the left hand of my split so that I don't have to move my hand around to reach for handy shortcuts while using my mouse/tablet to design.

If you are interested, here's a link to my current layout system.

I started planning for more ortho/QMK keyboards quite soon after I started working with the Planck Light, the first of which is a split ortholinear that I've been working on for about a month or so. I had just decided that at some point, I'd like to build a split, and lo and behold some extra PCBs surfaced after the group buy had ended. I snapped them up and started looking for a cheap case design, fully intending to do a simple budget build to see if I liked the idea. That didn't exactly go as planned.

The PCB was designed by Maple Computing… it known as the Let's Split Eh. It has USB-C, and backlighting built in… all I had to do was solder on switches. While researching 3d printed cases, I found a beautiful design for a let's split on reddit, and contacted the original poster who put in me touch with the designer (/u/smuttenDK) who not only kindly shared his CAD files with me, but helped me modify them to fit the PCB. He spent a lot of time answering my questions and helping me figure everything out, so I really owe him. My friend Andrew very kindly helped me print them on his fancy 3d printer, going through a couple iterations and colors. It's a simple design... a 3d printed shell that cradles the PCB and the plate sits on top. 3D printed sockets accept M3 nuts for standard M3 screws to hold the whole sandwich together. I'm already toying with the idea of printing a tented variant, but I'm just going to enjoy it as it is for now.

I ordered the plate lasercut from a laserboost.com in Barcelona Spain… it was surprisingly cheap and fast. I was impressed with their customer service response time, and the ease of making the order through their web app. This was probably the most nerve-wracking part of the build because do-overs would have been really expensive. It was really satisfying when I got to dry fit it to the case and could see that it was going to fit and work. I also got to dry fit the Zealio 67g tactile switches... they are very nice, a worthy successor to the MX Clears that I have loved for years. 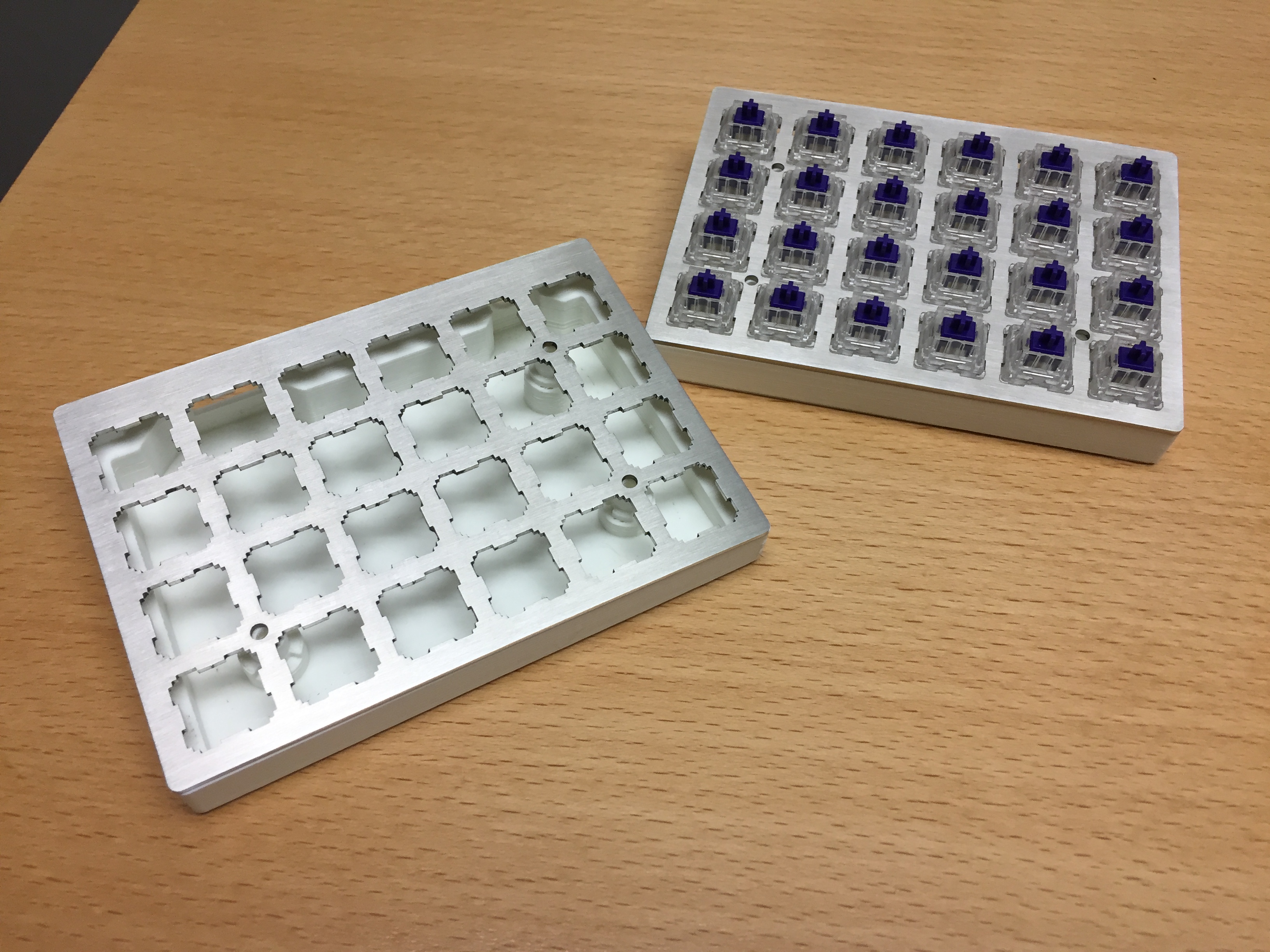 A friend who owns a phone repair shop was kind enough to lend me his worktable to solder on… he has all the fancy toys including very nice soldering irons and one of those magnifying stations. One of the guys in there started toying with the 3d print, and he turned out to have been a model-building hobbyist growing up. He spent fifteen minutes cleaning up the print with an Exacto knife, and suddenly everything fit nearly perfectly flush. 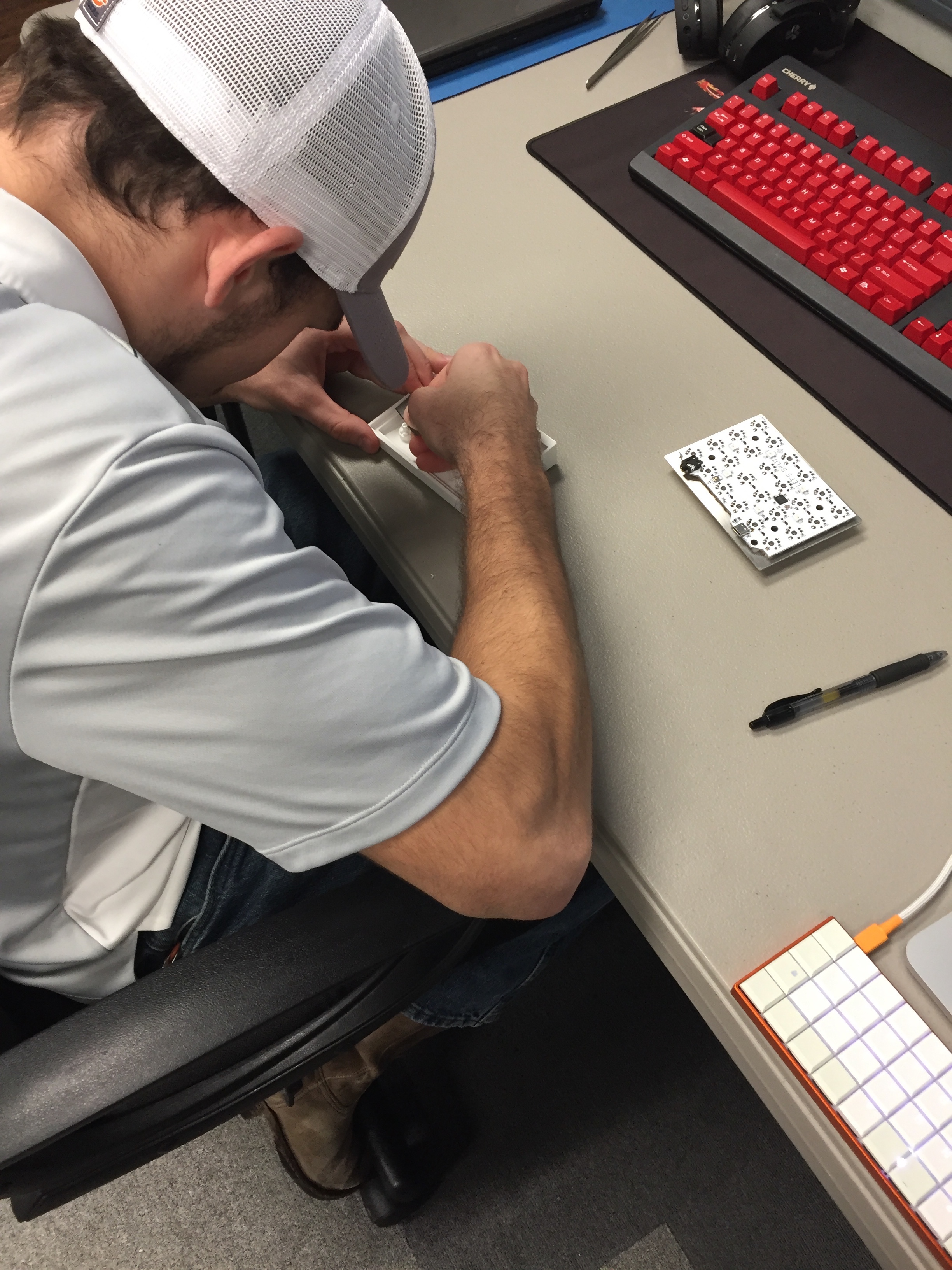 Finally on this Monday… the SA Ice Caps from PMK and custom TRRS cable from ZapCables came in so I can finally write this blog post on it. :P I really like it. Earlier today on a typing test on typingclub.com I peaked at 99wpm with 100% accuracy… the weird layout has forced me to iron out some things that were wrong about the way I touch-typed earlier. I think it's a keeper. 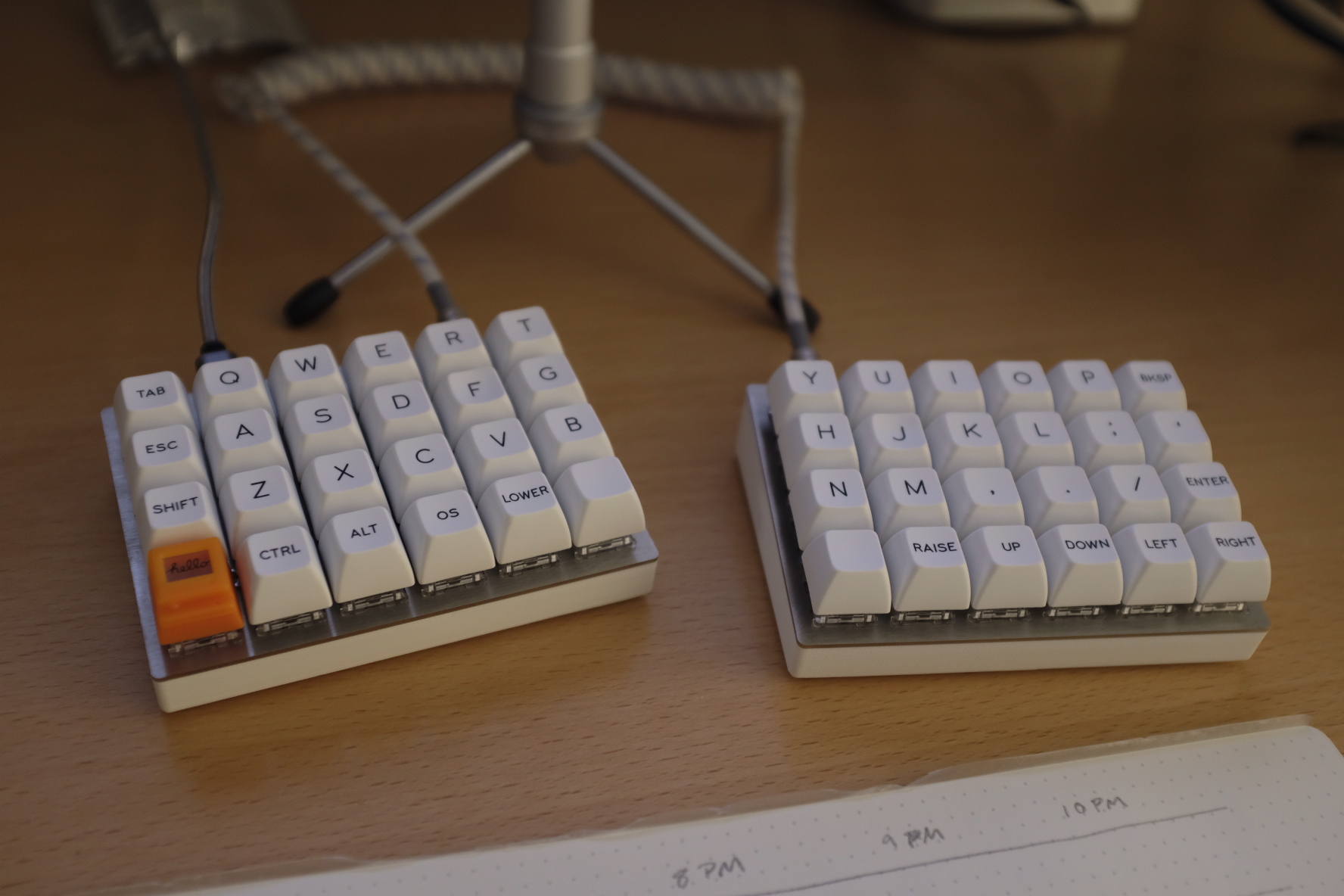 Anyway… it's been a satisfying and nerdy experience. I am really grateful to all the people on reddit, discord, and my friends in Birmingham who helped me put together this unique tool that I get to now enjoy every day at work. One of my favorite things is building tools for others, and now I get to enjoy this one for myself.