Walking Away From Rage 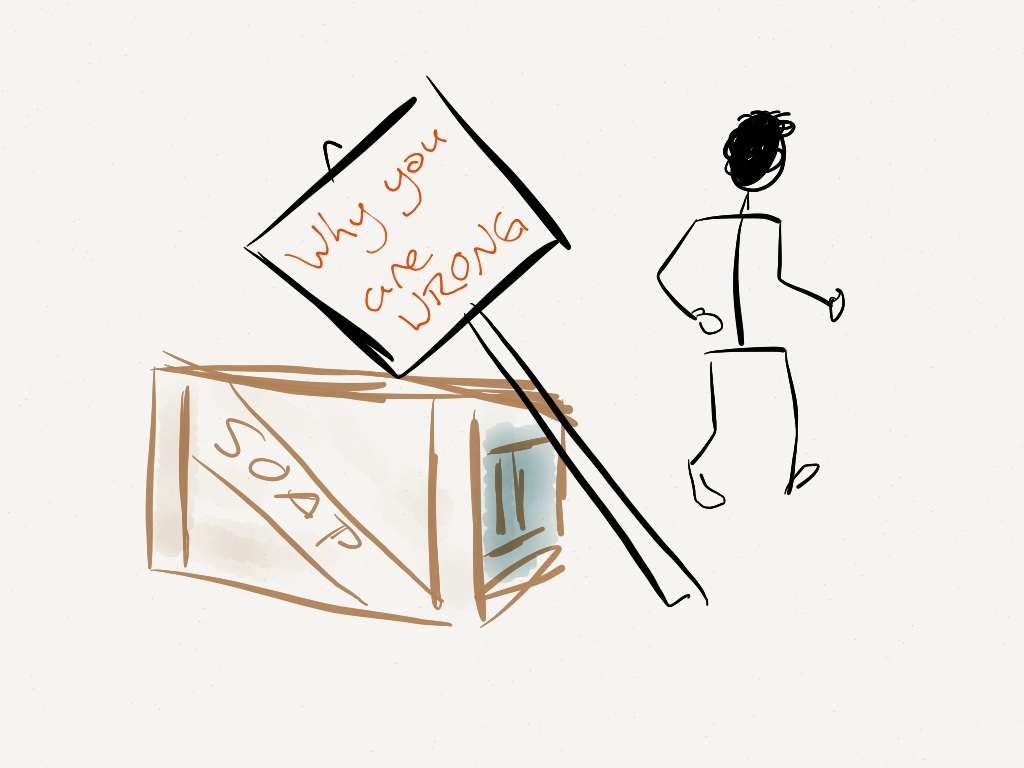 A long time ago, I decided I wouldn't talk about anything controversial on the Internet, whether it was a review of some entertainment, or an intense discussion of some point of doctrine. It was out of fear and not wanting to deal with the angry repercussions.

Not very long ago, I renewed that vow. This time, out of fear of myself.

As I finally conquered my fear of talking about my opinions, I discovered the pleasure of intelligent and thoughtful discourse. I enjoyed learning that a clever turn of phrase or metaphor can make people laugh thoughtfully. I also (unfortunately) gained a taste for the thrill of passion as conflicting views reveal themselves. And I discovered that I enjoyed causing this.

There is a pleasure in getting angry, at being right. We teach ourselves to enjoy, to treasure the feeling of standing up and stamping our feet down. It's a thing that I have felt in the past, and continue to battle. People practice soapboxing. It's a long-standing American tradition, and one I'd rather do away with.

I was recently watching a bunch of five to seven year olds playing. While the younger ones (by no means selfless or perfect,) played happily, the older ones practiced being angry and aping their older sibling's choicest insults and comebacks. You could see the impish glee creeping around the corners of their mouths after they successfully reproduced the fiery statements they were copying… it tasted sticky sweet with sin. It was the saddest sight I have seen all year.

That childlike discovery of the raw energy that comes with anger doesn't go away. It just has been refined and reformed. Instead of playmates, it becomes far far easier to spew our venom on the faceless, formless foe that floats out in the internet. We wound through blogs, slanted tweets and back-biting text messages. We (especially as Christians) have cultured and tailored our communication online to "deal with important things," and have come to ignore and downright sneer at anyone who might disagree with us on our interpretation of a book, movie, or sermon.

God forbid someone who would vote differently.

The apostle Paul had some brothers in the Lord who were struggling with whether it was sinful to eat meat sacrificed to idols. In response, he was willing to forgo any meat. Should we not also be willing to give up arguing about minor points in order that we don't cause others to stumble as they seek the Gospel? There are important things to discuss in this world. And we should. But we should guard our hearts against the slow and terrible burn of anger, and not mistake inordinate passion for righteous anger. Jesus got angry, yes. But he flipped tables, not fingers.

If you meet me in a coffee shop or at my home, I will gladly talk with you about hard, difficult, "controversial" things. At this point though, I don't trust my ability to write to convey my heart safely to your screen. It's so easy for my meaning to be lost in translation, or in a retweet, reblog, or comment. I'd rather you be able to look into my eyes and hopefully see the spirit in which I speak.

Is it possible to talk and write passionately about important things with a clean and calm heart? I say yes. Read C.S. Lewis. G.K. Chesterton. A.W. Tozer. They were so in love with their Savior that they were constantly careful in the way they conveyed themselves, as to be winsome to anyone who was listening. I would like to communicate like those men. Clever without sarcasm. Potent without anger. Wisdom with humbleness.

And so I shall endeavor to keep myself to this. There will be things I will rail against on the internet. Hopefully the Lord (and my beloved proofreader and mother) will restrain me from doing any brother or sister in Christ any harm. I hope you will also consider weighing carefully the way you talk and write, and guard your heart carefully against the thrill that comes with false righteous anger.