At the end of this month, my month’s link post is going to be a little different. I’m changing all my note-taking systems under the hood… and I haven’t rebuilt my link sharing automation. Yet.

Prompted by Jeremy from Take On Rules1, I changed up the way I read blogs. For years I’ve been using the excellent Reeder to read RSS both on my phone and on my computer. I have no complaints with it. It is a great app. Unless you are a command-line geek, you should use Reeder. I used Inoreader as the syncing engine, so that my unread count was always in sync between my computers and phone. I am a big fan of owning the stream of news coming into your life, so if you haven’t tried this before (read: weren’t active around the time Google Reader was alive) using tools like these to build your own newsfeed is very useful.

However, I’ve been trying to wean myself from the “just checks”2 on my phone… and Reeder has long been the number one thing I flip open when I have ten seconds to spare. After nearly a decade, it is time to change that.

Like Jeremy, I am switching to Newsboat, which I can only access on a computer, hopefully reducing phone-addiction3. I’m excited to own my news reading system, and hopefully to start writing some bookmark scripts that feed the rest of my note taking system.

I’m syncing the cache.db sqlite file back and forth with Dropbox, and so far it works well, as long as you stick to either XDG or dotdir style folders.

It’s only been a few days, but I really like Newsboat. Part of it is just the novelty of change, but it does check several of my boxes: Owning my data. Customizable and scriptable. Based on plain text. I’m surprised that I didn’t try this before.

I find that the combination of raw text makes it really scannable. I want to be more interested in essays over press releases, I find myself bookmarking more thoughtful articles than before. 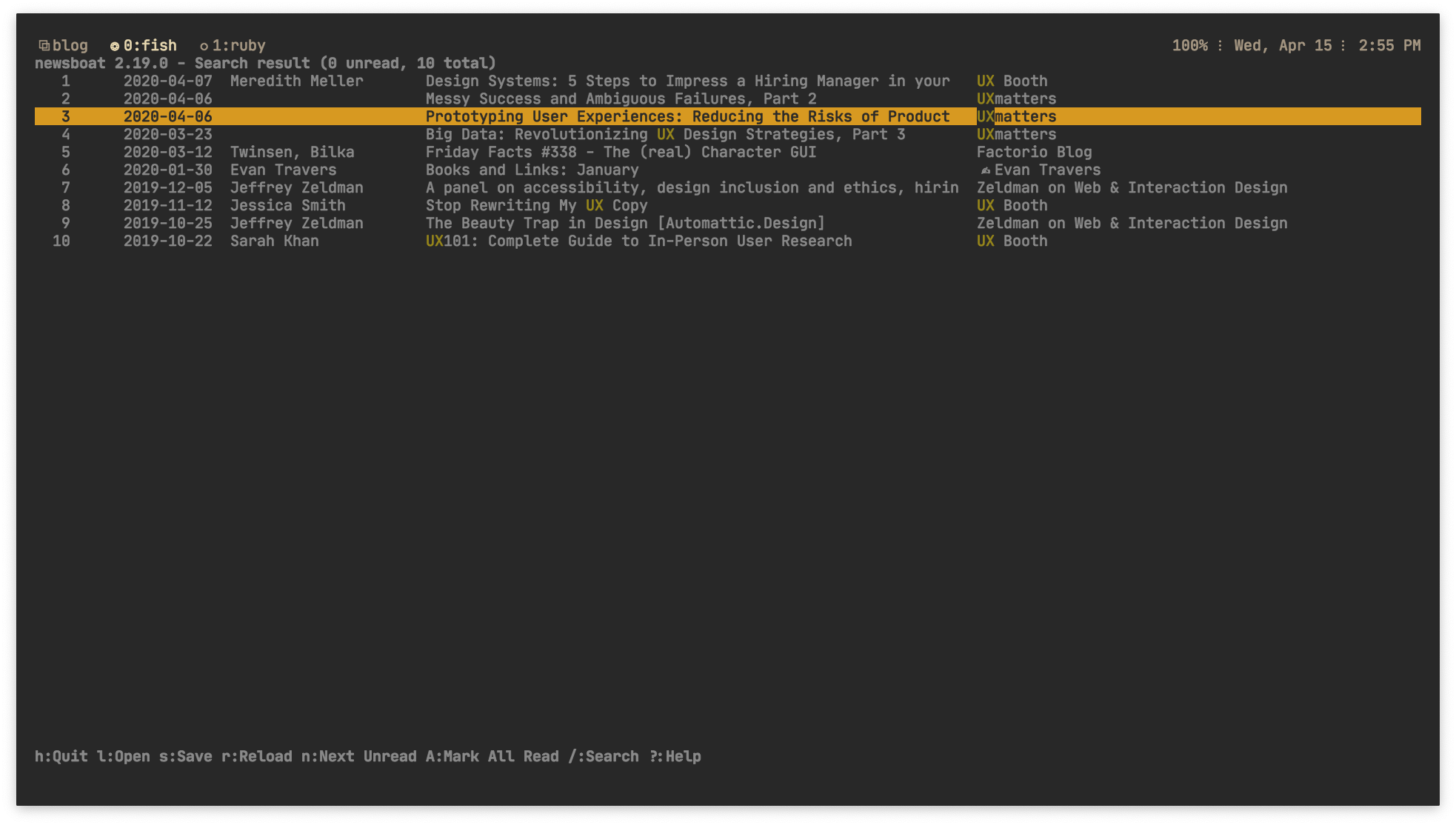 The search is awesome. The ability to boot it up, and find the link that I saw not that long ago? It’s really fast in Newsboat.

I found a few tweaks that you’ll definitely want to try in your config file (most of these came from Jeremy’s original post:

Setting the browser… there are a number of different ways to do this, but on OSX this is the cleanest that I have found. If you directly use the exectuable in the package (as I have seen some others do) you may get error messages trickling back into Newsboat. This seems to work 100% of the time without the weird errors and warnings.

Borrowing and expanding from an article I found here, here’s some config that will make newsboat behave more like vim for reading purposes.

My goal is to be more intentional with my reading and sharing. Christian over at zettelkasten.de calls what I have been doing collector’s fallacy:

There’s a tendency in all of us to gather useful stuff and feel good about it. To collect is a reward in itself. As knowledge workers, we’re inclined to look for the next groundbreaking thought, for intellectual stimulation: we pile up promising books and articles, and we store half the internet as bookmarks, just so we get the feeling of being on the cutting edge.

I have been very guilty of this. I want to be more intentional and less… graze-y with my media consumption, and I think it’s time to trim the fat on the RSS. I pruned some old feeds, feeds that haven’t interested me in a while, and hid any feed that is 100% press releases. I can always find it if I need it, but being able to hide them is awesome4.

I am still working on what a more intentional sharing system will look like, but this month I’ll probably pull all the link notes for this month using the new script smz that I’m working on with some folks on github: smz s -t link | xargs cat | pbcopy.

I normally store all my dotfiles in my dotfiles repo… but I’m not yet comfortable sharing my urls file with the universe. As it is, you can see my current config file here.